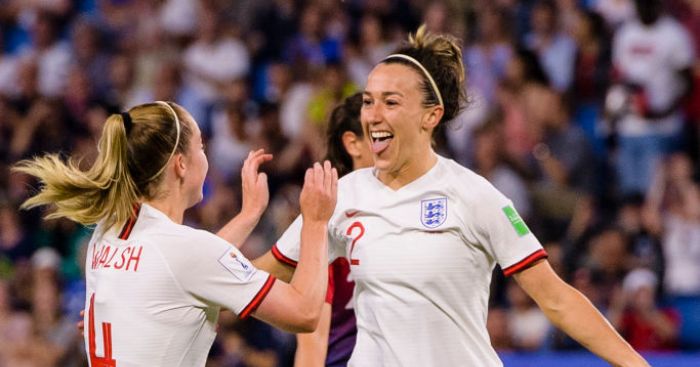 Who’s this week’s hero, Johnny?
This week’s hero plays for Olympique Lyonnais and is the best right-back in the world. Hailing from the gloriously wild lands of Northumberland, she has played for Sunderland, Everton, Liverpool and Manchester City before moving to France. She has also played for England at every level and scored one of the goals of this year’s World Cup.

She has a very heavy trophy cabinet. Look at this haul!

Her list of personal awards is also incredibly impressive.

There is no doubt that she has worked with a rare determination to get where she is today and overcome many hurdles and obstacles. Ten years ago, aged just 17, she moved to North Carolina to study at UNC and was so impressive that she won a scholarship and went on to feature prominently in midfield for the Tar Heels varsity team. She was the first British player to win the NCAA Cup.

But at 18 she suffered a knee injury and by 23 had had four operations on it, pretty much having to work on her own to recover because of the lack of support. Speaking to the Telegraph she said:

“I think the injuries weren’t the problem, it’s more the fact that I didn’t have any support from…well, I only had it from my mum. And I was playing for England. I was playing for teams at the time. Nothing was as professional as it is now, so I just got left to my own devices. I didn’t really know what I was doing.”

She talks as if this was some distant dark age but it is actually just a few years ago and was a time when – and let’s just pause to think about what this tells us about the FA and our patriarchal society – England’s players still had to cut the netting out of shorts made to accommodate the male anatomy simply because there were none available that were made for women! You might think this would be the case 100 years ago but not in the last ten.

After only playing sporadically for two and a half years she was cut adrift.

“I felt like no one really cared about me,” she said. “That they didn’t think I would make it, that I wasn’t going anywhere. I got told a few times that I wasn’t really going to get picked for England again because I’d got too many injuries. That they weren’t going to help me because they didn’t have the funds.

“That was the hardest thing: being left alone by the people I thought were meant to be supporting me. But it’s made me in a way, because I’ve not had to rely on anyone. I always know how to look after myself.”

This all speaks of a woman with a fierce determination, perhaps all the more because she admits to being a bit socially awkward, being incredibly shy and finding talking to be people difficult.

“It is not social anxiety, just something that, as I’ve got older, I’ve had to try a bit harder at. People think you feel the pressure playing football, but I never feel the pressure in any big games. I always feel more pressure talking to strangers and meeting new people than I do playing in stadiums full of 50,000 people.”

She’s incredibly grounded. Suzie Wrack, in a lovely piece in The Guardian, called her “sometimes frustratingly humble” because she’s always keen to play down being so bloody good and keen to talk up the qualities of others instead. That sounds like the behaviour of a genuinely nice person.

Now playing for the best team in the world and picking up trophies left right and centre, she’s only too aware of her position as a role model and an inspiration when she says “I think it’s important women are empowered to do anything”.

That’ll be the wonderful, the marvellous, the golden Lucy Bronze, then.

What have they done to deserve this then?
Well there was this piledriver against Norway.

Last week, she was awarded the UEFA Women’s Player of the Year, one of the biggest honours in the game. Mind you, the trophy is a creepy armless torso that looks more like a victim of a serial killer in a Scandi crime drama.

She has also made the shortlist for FIFA Player of the Year alongside Megan Rapinoe and Alex Morgan and as such is at the pinnacle of the game.

These honours may have come as a surprise to her but surely not to anyone who has watched her play. As a full-back she confesses to getting more pleasure out of tough tackling and preventing goals than anything else. And she is a hell of a tough tackler; indeed, her middle name is actually Tough.

Her sheer athleticism and physicality is impressive and even intimidating. As Steph Houghton once said:

“The way she takes games by the scruff of the neck, her energy – physically nobody can ever match her; that’s in the world probably, never mind Europe.”

While she was (controversially for some) played in a more central role for England during the successful SheBelieves win, and in the loss to USA in France, it’s hard not to see her best position as being an overlapping, attacking right-back, partly for her defensive qualities but also her ability to plunder forward and create goals for others. The amount of ground she covers in a game is remarkable and speaks to her fitness levels, something she puts down to doing so much running as a kid.

Manager Phil Neville declared her “the best player in the world, without a shadow of a doubt” during the World Cup and even while allowing for his tendency towards hyperbole, he was not wrong.

For someone to rise to the heights Lucy has isn’t just testament to her football talents, given the hardships and knockbacks in women’s football that she and others in this country have had to overcome, simply because they were not taken seriously as sportswomen and because women’s football was and still is derided by some. It is a testament to her strength of character and refusal to be denied that she has risen to the very peak of the football mountain.

When reading about the travails so many have had to endure, the blatant disregard and discrimination is disgusting. Let’s not forget that Fara Williams, England’s most-capped player was homeless for six years even while actually playing for her country!

Lucy talks of how when at Sunderland she was travelling down from Northumberland to train, it was an hour-and-a-half round trip taken three days a week that she had to do, having being banned from playing for Alnwick Town due to the small problem of being female.

So hers isn’t just a win for a great footballer, it is a win for a great person with huge grit and guts, who has overcome considerable adversity, has forged a path for others to follow and who has earned every last drop of glory and acclaim she is now receiving.

Media reaction?
Outside of the turned-down mouths of the usual suspects towards women’s football, there is a great deal of positivity towards Lucy and what she has achieved.

The BBC’s exemplary coverage of the World Cup this summer made all the players increasingly well-known household names and none more so than Lucy. There was an unalloyed pleasure from seeing England’s players enjoy success. A transference of their positivity and progressive, open-hearted joy from the team through the televisions and radios to our homes. They made us feel good. Lucy makes us feel good.

During press conferences she did in that competition; you could still tell she’s a shy, bashful sort of person and yet has totally embraced her role as an elite player on the international stage.

There were plenty of press interviews pre-tournament which highlighted her bumpy ride to the top and these only helped increase respect, indeed awe, for her achievements.

Anyone grumpy about it?
Absolutely no-one. I even did that most terrifying thing and looked through her timeline on Twitter underneath her post holding the UEFA Footballer of the Year trophy and couldn’t find any of the disrespect and misogyny that we’ve come to expect. You’d hope this may be a sign of changing times.

What the people say
If I had asked for comments about any award winner at the peak of the men’s game, I’d have been inundated. The fact that I wasn’t for Lucy reflects just how much women’s football is still in its development stages. While it is utterly transformed from what it was even a decade ago, there is no substitute for just being around and being high-profile for many generations, in terms of becoming established in the general consciousness.

I don’t know, but I would also speculate that some men are unsure how to express admiration for female players, fearing unintentionally seeming patronising, sexist or boorish. It’s understandable. No-one wants to be THAT guy, so it’s easier to keep quiet. I’ve also been told of men who enjoy women’s football but keep quiet about it for fear of attracting the wrath of the more beastly boys, for all the usual appalling male reasons. So perhaps that’s in the mix as well.

‘Would get in the men’s squad.’

‘Another ex-Sunderland Ladies player doing well. That production line was the female equivalent of United’s Class of 92.’

And that was the sum total of your contributions.

What does the future hold?
At 27, as long as her knee doesn’t go boom, she’s got several seasons at the top of the game yet and with the Olympics next year followed by the Euros on home soil in 2021, the spotlight will shine brightly on her in the coming years. But after that, she doesn’t see herself as going into the media like her friend Alex Scott.

In an interview with thegentlewoman.co.uk she said: “I really like the idea of changing the game, like Baroness Sue Campbell, the head of women’s football. I want to help. I’ve played it, I know everything about it, and so many things could be done to change it – things that aren’t that hard.” She stretches out. “Or I might just retire, then buy a bar in Spain and run that.”

One thing I’m sure about, whether it’s on the pitch or off it, we’ve not heard the last of this inspirational lass from Northumberland.

hero of the week Lucy Bronze