Home Cheeky Punt Our tip? Liverpool to beat Man Utd to nil at 13/8 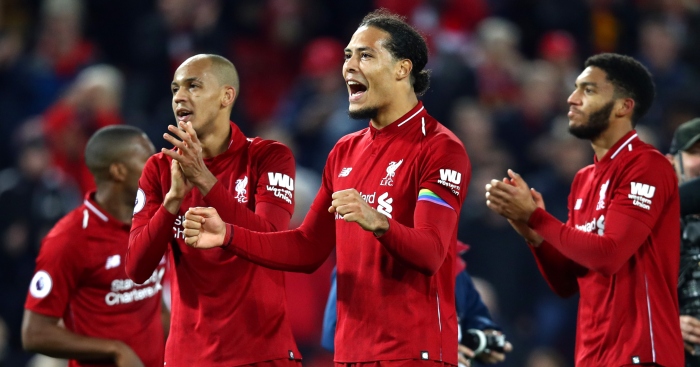 Manchester City v Everton
So it’s nearly Christmas then is it? I note a certain irony as we celebrate the birth of Christ and I take his name in vain a solid 45 times stood outside in the pitch black and freezing cold putting up some very questionable Christmas lights. Anyway, Pep Guardiola will be after a response after that defeat to Chelsea last weekend and City could really go to town on the Toffees here. Big Leroy Sane has been in fabulous goalscoring nick in recent weeks (nine goals in his last 12 matches in all competitions) so looks worth nibbling at 6/1 to score first at the Etihad.
Betting: Sane to score first at 6/1 (Betfair)

Crystal Palace v Leicester City
The Foxes have scored in every away Premier League game so far and can mug Palace here. Eagles talisman Wilfried Zaha is suspended and their win percentage stats without the brilliant Ivorian are laughably bad.
Betting: Leicester to win at 2/1 (Betfair)

Huddersfield Town v Newcastle United
Right then. I’ll guarantee this isn’t the last game shown on Match of the Day on Saturday night. There will be drama. There will be goals. There will be Toon fans in t-shirts despite the fact it will more than likely be snowing.
Betting: Goal in both halves – yes at 11/10 (888 Sport)

Tottenham v Burnley
Harry Kane is a heavy favourite to win Sports Personality of the Year Award on Sunday, and as short as 5/1 to score a hat-trick against Burnley. 5/1 is a shocking price by the way. And I’m not sure he should be favourite for SPOTY in a year Tyson Fury battled drink and drug demons, stood Deontay Wilder on his head in Los Angeles (but was robbed) and gave away his £8million purse from said robbery to the homeless. Forgive me if I instead have a tickle on the brilliant Christian Eriksen to score first at 13/2.
Betting: Eriksen to score first at 13/2 (Betfair)

Watford v Cardiff City
The Hornets are winless in six but served a timely reminder of what they are all about when their main men are all, to use a Souness-ism, “at it” by going agonisingly close to beating Everton at Goodison on Monday. When you get right down to it, Watford are a good side and can definitely spank Cardiff – who have taken one point from a possible 21 on the road – at Vicarage Road.
Betting: Watford (-1) to win at 15/8 (Betfair)

Wolves v Bournemouth
So how is Brexit treating you? I admit I’m not totally up to speed with all the potential issues around borders and passports. However I’ve always questioned why we need a passport anyway? We should definitely be allowed to just shout “British! Less of your nonsense!” and swagger straight through customs like Liam Gallagher at Knebworth circa 1996. Wolves are bidding for a third win in a row and should get it against a Cherries side who’ve won just one of their last six matches.
Betting: Wolves to win 2-1 at 17/2 (bet365)

Fulham v West Ham
After a ropey old start to life at the London Stadium Felipe Anderson has scored six times for West Ham this season and looks a cracking bet at 10/1 to score first against Fulham, who are quite simply a shambles at the minute.
Betting: Anderson to score first at 10/1 (Betfair)

Brighton v Chelsea
Maurizio Sarri’s Chelsea are a tough team to predict just now. Losing to Wolves. Played sh**e. Then beat Manchester City. Played mint. Who knows how they will go against Brighton. But they look short at 4/9 and we have a hunch there will be a penalty at the Amex, for reasons too complex to explain in this column.
Betting: Penalty in the match – yes at 11/4 (888 Sport)

Southampton v Arsenal
Arsenal look a belter of a bet at 10/11 when they travel to Southampton this weekend. The Gunners have won 10 of their last 14 in the league while Southampton were last seen putting in a p**s poor shift in losing to Cardiff. F**king Cardiff!
Betting: Arsenal to win at 10/11 (bet365)

Liverpool v Manchester United
The fact that Liverpool have not beaten Manchester United in the league since 2014 is a just proper, mental stat. As is the fact you are 1860 times more likely to be hit by a world-ending asteroid than you are getting bombed by a terrorist. But can a case really be made for Jose Mourinho’s beleaguered battlers to come away from Anfield with anything more than a bloody nose on Sunday? This Liverpool squad looks head and shoulders about this Red Devils vintage just now and given how well Jurgen Klopp’s men have been playing defensively this season, a punt on them winning without conceding looks sexy.
Betting: Liverpool to win to nil at 13/8 (bet365)