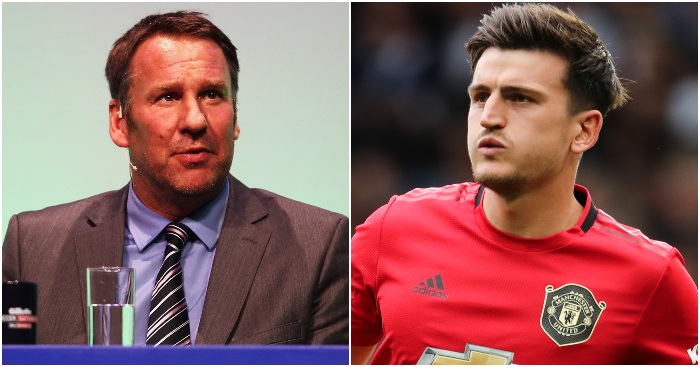 Harry Maguire is set to receive an apology from Paul Merson after the former Arsenal attacker admitted his criticism of the Manchester United new boy was ‘out of order’.

Merson stated his disbelief at Maguire’s move to United for a record-breaking fee on Soccer Saturday – but the Sky Sports pundit feels he perhaps went too far.

“Harry Maguire for £80m is ridiculous,” Merson said on Saturday. “It’s ridiculous at the highest level. He’s alright. He’ll improve them but at £80m?

“You’ve got to remember, yeah, he ripped it up with England – he played in a three.

Reflecting on his comments on The Debate on Monday night, 24 hours after Maguire’s United debut in the 4-0  over Chelsea, Merson revealed he had reached out to Maguire to offer an explanation.

“I thought he was steady,” Merson said. “He’s commanding, he’s got that presence, he looks like a centre-half, he doesn’t mess about. I thought he did very well, I did.

“I thought I was very critical of him on Saturday if I’m being honest, on Soccer Saturday.

“I tried to get hold of him today, I’ll talk to him tomorrow, he text me back. I thought I was a bit critical if I’m being honest.

“I thought what I wanted to say didn’t really come across the way I thought he should have. I thought it was a lot of money but I sort of didn’t give him the credit he deserves of how good he is.

“I was brought up in a day where it was ‘clear your lines’, a Tony Adams or a John Terry or someone like that. I was a bit disrespectful in that way, he’s played in a World Cup semi-final, he’s an international.

“I was out of order and I’ll be the first to admit that.”