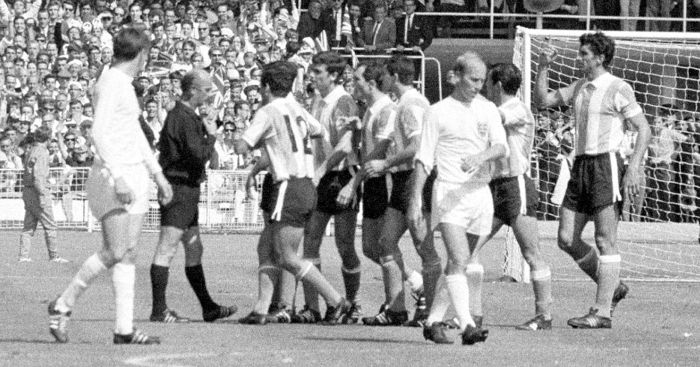 The first man to play in five different World Cups, 91-year-old Carbajal made his international debut at the 1950 tournament, with his Mexico side facing off against Brazil in the first ever game at the now legendary Maracana stadium. Sixteen years later he made his final World Cup appearance in another iconic arena, bidding farewell to a tournament that he’d become synonymous with in his country’s 0-0 draw with Uruguay at Wembley. If you fancy a goalkeeper challenge, try naming two over-80 Italian keepers with younger relatives who also ended up wearing the number one jersey.

The rock of the great Inter Milan side of the 60s, Burgnich was the ideal right-back for legendary manager Helenio Herrera’s ultra-defensive approach. The Catenaccio system employed by Herrara was highly criticised at the time but Burgnich, along with world-class defenders Armando Picchi and Giacinto Facchetti, made Inter an effective and impenetrable force at home and abroad. The 81 year-old can look back on a career that saw him pick up four Serie A titles and two European Cups.

Now 91 years old, Santamaria was one of the most accomplished defenders of the 50s and early 60s, combining an excellent reading of the game with the vigorous tackling you’d expect from a defender hailing from Uruguay. He moved from hometown club Nacional to Real Madrid in 1957 and helped his new side to three European Cup wins in his first three seasons at the club. Santamaria was still performing at the top level for Madrid in his mid-30s as the club dominated La Liga for the majority of the 60s.

Just too young to have featured in 1954 and just a little too old to have played on home soil for Germany in 1974, Willi Schulz missed out on two World Cup-winning squads but remains one of his country’s finest ever defenders. Schulz didn’t pick up the domestic honours his talent merited either, with Hamburg winning national titles just before and after his career at the Volksparkstadion. His former national teammate Franz Beckenbauer lifted the trophies Schulz missed out on, achieving success with Germany and Hamburg, as well as Bayern Munich in his pomp. But at 75, Der Kaiser isn’t quite experienced enough to feature for this side.

Long before it became customary to think of German players as unnervingly consistent, relentlessly efficient and reliable, Karl-Heinz Schnellinger was one of the most unnervingly consistent, relentlessly efficient and reliable defenders of the 60s and early 70s. Having blazed a trail for future national stereotypes, he also became a trendsetter for German footballers who wanted a career abroad by spending his prime years at AC Milan, where he won the 1969 European Cup.

Plenty of options on the right-wing for the over-80s side, with 92-year-old Giampiero Boniperti a contender. A hero at Juventus, Boniperti is the closest the Old Lady will ever get to having an old man, with the Italian spending his entire playing career at the club before serving as chairman. Former Real Madrid wingers Amancio and Canario are also in contention, as is Ajax legend Sjaak Swart, but Swedish speedster Kurt Hamrin gets the spot.

Skilful, sturdy and a regular goalscorer from the wing, Hamrin’s excellent displays helped Sweden to the 1958 World Cup final and he also proved to be a pivotal figure in Serie A. One of Fiorentina’s greatest players, he later went on to lift the European Cup with AC Milan alongside Schnellinger in 1969, bagging the decisive goal in the semi-final against holders Manchester United.

Mainly known on these shores for his sending-off against England in the Three Lions’ World Cup quarter-final match with Argentina in 1966, Antonio Rattin’s furious protests, alongside the aggressive play from his teammates, caused Alf Ramsey to label the South Americans as animals. However, Rattin was more than just a beast looking to maim his prey – he was a player ahead of his time, marshalling the midfield area and positioning himself perfectly to dictate the play and set-up quick attacks. Former Celtic and Manchester United midfielder Pat Crerand, 81, is another option for the side and with the Scot never having any pace during his playing days, he’d be ideally suited to OAP football.

An old-fashioned winger to fit in with the old boys, Gento’s outstanding pace made him a nightmare for full-backs of the era. However, the Spaniard could do more than just knock-and-run, with the Real Madrid legend striking up an almost telepathic connection with Argentinean/Colombian/Spanish icon Alfredo Di Stefano in the 50s and 60s. Incredibly, he was part of six European Cup-winning sides, becoming the first player to achieve the feat after captaining Los Blancos to victory in 1966. Gento’s fellow countrymen Luis Del Sol and Luis Suarez (not that one) are also eligible.

Charlton could start on the left-wing or upfront for this side at 83 but he’s going to take the number 8 shirt. He could, of course, thwack a ball pretty damn hard but there was far more intelligence, skill and finesse to the World Cup winner’s game than pure power. Charlton could do anything from an offensive point of view and whilst he wasn’t adept at tackling he was very much a team player, willing to track back and begin attacks as well as finishing them. Having survived the Munich Air Crash, Charlton kept the spirit of the Busby Babes alive and led Manchester United to a European Cup win ten years after the tragic events of 1958.

The greatest of all time? Or the most overrated? A great scorer of goals and a scorer of great goals, Pele was a predator and a playmaker, a complete footballer. A world-class talent at 17, he instantly became one of the most recognisable players on the planet after the 1958 World Cup, in a pre access-all-areas era that made it impossible for those outside of Brazil to predict just how much of a huge impact the teenager would make at the tournament. Three World Cup wins and countless titles and personal accolades in Brazil puts him in the GOAT equation with Messi, Maradona, Cruyff and the Ronaldos. Some would argue that any player worthy of being called the best of all time should’ve tested themselves in European competition but the fact that Pele is mentioned as the greatest without doing that may answer the most contentious of questions after all.

England’s finest ever striker completes the over-80s side, with Greaves reaching octogenarian status earlier this year. The former Chelsea and Spurs forward had the ability to score from any situation, whether it be a bullet header, an instinctive first-time shot planted in the corner of the goal or twisting the blood of defenders before calmly sliding it past the keeper. Other British forwards take up spots on the bench with Scottish hero Denis Law available for selection alongside Liverpool legend Roger Hunt. Just Fontaine’s incredible 13-goal haul at the 1958 World Cup makes the 87 year-old a key player in any OAP knock-out tournament whilst prolific German striker Uwe Seeler could also be an option upfront. Pele’s fellow South Americans Luis Artime, Jose Altafini and Evaristo are all eligible for selection as well.