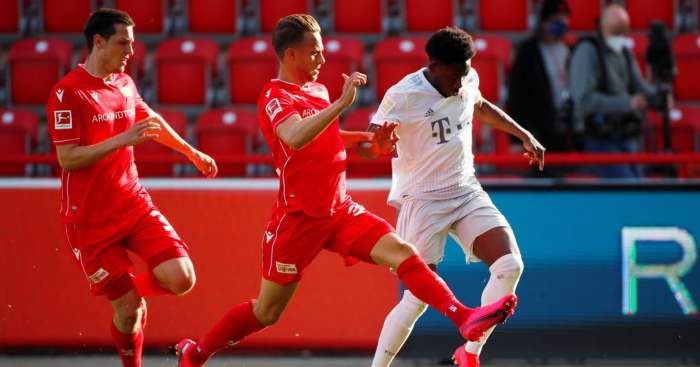 Davies moved to Bayern Munich from Vancouver Whitecaps in January 2019 for £9million with the full-back enjoying an impressive first full season at the Allianz.

The Canada international has been so good that Bayern have already signed him up to a new five-year contract and has now turned into one of the most exciting defensive prospects in world football.

MAILBOX: Could football be ‘better’ without pesky fans?

Hargreaves has said that Davies is one of his “favourite players to watch” and some of his abilities are similar to those possessed by Liverpool defender Alexander-Arnold.

“At the top level, you can see that speed is one of the most important attributes. ‘If you can play multiple positions – he’s actually winger, they signed him to play in one of the wings but because of the form of Gnabry and Coman, the options that they have, he hasn’t played there.

“Obviously they had injuries at centre-back. Alaba went to centre-back – he’s been outstanding as well. But Alphonso Davies has been one of the best players in the Bundesliga. He makes that position look so easy and I think going forward he has the potential to be one of the best left-backs in the world.

“You think about what Trent Alexander-Arnold does for Liverpool, he might not have that passing quality but his athleticism, going forward – he can almost play the whole left flank on his own, which allows Gnabry to come inside and get close to Lewandowski and Muller.

“He’s brilliant to watch, he’s exceptional, he’s one of my favourite players to watch in the modern game.”