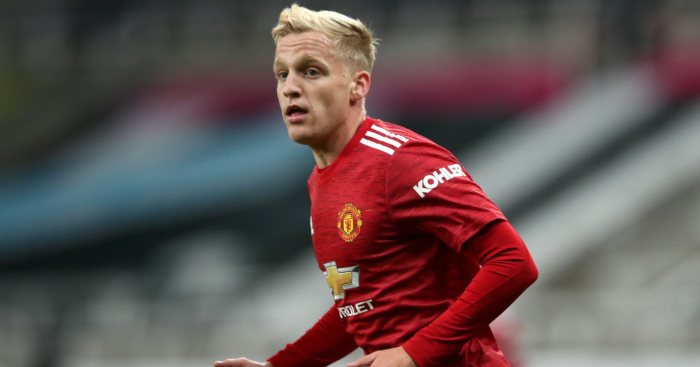 Expectations were high after the Red Devils pulled off somewhat of a coup in signing the talented 23-year-old from Ajax for an initial fee of 39 million euros (£34.1m).

But Van De Beek has started more matches for Holland than Man Utd since making the switch, having been restricted to five appearances off the bench and just two starting roles in the Carabao Cup.

And Hargreaves believes Man Utd have invested in the wrong type of player as they already have “two number eights” at the club.

Hargreaves told BT Sport: “Because they’ve got two number eights in there with Bruno and Pogba and maybe again it comes down to recruitment.

“When City need something, they go get something that they don’t have and I think United had those two players there.

“I’m sure he’s going to get a run of games but when you spend £40m on a player you’d like to think he’d play. But I think Ole will find a place when it’s available.”

Dutch great Marco Van Basten is among those to have questioned Van De Beek’s decision to move to the north west following his inauspicious start, but Solskjaer said on Tuesday that his time will come soon enough.

“When players come into a new league, a new team, it’s always going to be a time of (transition),” said Solskjaer, who spent his fair share of time on the bench during his playing days.

“When Donny has played, he’s played really well. I think it says a lot about our depth of quality in the squad that we don’t have to use him every single game because we have other players as well.

“Donny is going to play a big, big part this year. At the moment, I realise the topic is Donny Van De Beek and it’s nice for some players or commentators to have a little go.

“I know that you’re short for time when you’re on telly and you have to put your points across very quickly, but you have to know that you don’t have to start the first three games to be a very important player in the squad.

“I would be disappointed if some of my team-mates said that I wasn’t important at Man United but I didn’t start many games, so Donny’s going to be very, very important for us, don’t worry about that.”