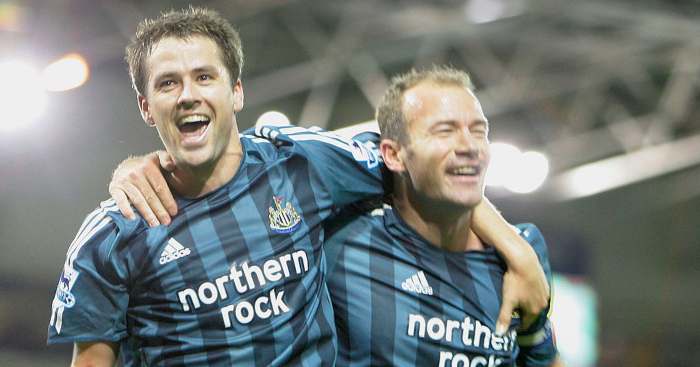 Michael Owen has revealed why he is no longer “big mates” with former team-mate Alan Shearer after their public row this week.

The former footballers have been at each other’s throats for 10 years – ever since Shearer was brought in as manager to rescue the Magpies from relegation in the 2008-09 season.

Owen’s book ‘Reboot’ – which has been serialised by the Daily Mirror – is scathing of his time on Tyneside with Owen claiming: “I should have followed my gut instincts from the start. I didn’t want to go there – my heart was still set on a return to Liverpool.”

Owen also suggested that he doesn’t have to justify himself to Newcastle fans – a statement which Shearer took exception to on Twitter.

Shearer tweeted: “Yes Michael, we thought that also, whilst on £120k a week…”

Owen though was quick to reply and questioned Shearer’s loyalty to Newcastle, claiming he wanted to sign for Liverpool.

Not sure you are as loyal to Newcastle as you make out mate. I distinctly remember you being inches away from signing for Liverpool after Sir Bobby Robson put you on the bench. You tried everything to get out. https://t.co/ZQBrlojeEv

However, Owen says that the pair used to be “big mates” but he explains that Shearer has “changed”.

“We were big, big mates,” Owen told the Daily Mirror. “We used to play golf every week, strikers vs ‘keepers at Newcastle, me and Shearer v (Steve) Harper and (Shay) Given. We would fly off to Loch Lomond occasionally, really good courses.

“I stayed in his house, we were big mates.

“He’s changed to me. I’ve got nothing against him. This is the ironic thing.

“A year after I left Newcastle, I was talking to a mate who is both of our friends, and said I should give Alan call about that. He said ‘I wouldn’t if I would you mate’.

“There was nothing, I don’t dislike him, I’ve got nothing against him, and unless I can’t read people, I had no idea for like a year or two after Newcastle got relegated, that he had a gripe with me.

“I hadn’t any clue, so that was the first time I knew, and I was like “oh, you are joking’. And then it all came out.

“I’ve got no problem, with him – it’s just he has an issue with what he thinks I did wrong.”

“I can be saying in a sentence that I didn’t enjoy the last six years of my career. And if you cut it off there, then it sounds bad.

“But there’s more to it, when you listen in context where I say ‘because I wasn’t the same player, I wasn’t quick any more, that’s why I didn’t enjoy it’.

“I didn’t enjoy it as much because I wasn’t as good. Things like that are then debated when it’s not really a fair representation of mine.

“We have all been in the industry a long time. As soon as you agree to do it (a book), you understand what comes with it – and serialising the book as well, they have to generate headlines…and it did.

“As a person, the people who know me, I’m shy, I was born that way. My job has brought it out of me a little bit, but it’s not the most comfortable thing, when I’m waking up wondering what people are going to be saying that day.

“Of course, when you also feel some of it has been maybe taken out of context in a way – or the full context hasn’t been given – and then people start discussing it even though you know it’s wrong, and say on radio they’re having a big debate on something that isn’t even accurate, that’s the most annoying thing in a way.”