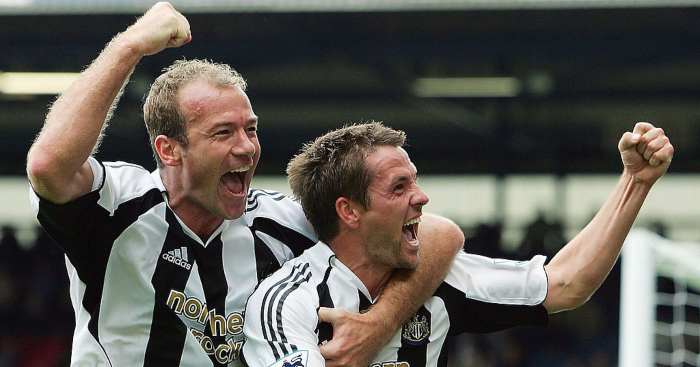 Michael Owen’s new book has seen his feud with Alan Shearer reignited after he made a number of claims about his time at Newcastle United.

The former footballers have been at each other’s throats for 10 years – ever since Shearer was brought in as manager to rescue the Magpies from relegation in the 2008-09 season.

Owen’s book ‘Reboot’ – which has been serialised by the Daily Mirror – is scathing of his time on Tyneside with Owen claiming: “I should have followed my gut instincts from the start. I didn’t want to go there – my heart was still set on a return to Liverpool.”

Owen also suggested that he doesn’t have to justify himself to Newcastle fans – a statement which Shearer took exception to on Twitter.

Shearer tweeted: “Yes Michael, we thought that also, whilst on £120k a week…”

Owen though was quick to reply and questioned Shearer’s loyalty to Newcastle, claiming he wanted to sign for Liverpool.

Not sure you are as loyal to Newcastle as you make out mate. I distinctly remember you being inches away from signing for Liverpool after Sir Bobby Robson put you on the bench. You tried everything to get out. https://t.co/ZQBrlojeEv

The pair, who were apparently once close friends, both almost went to Anfield with Owen suggesting that when he signed for Manchester United his thoughts were that he would only play for a year before going back to Liverpool.

Owen also refers to a clause in his contract which saw him available to Liverpool at the end of every season.

The 39-year-old also tweeted that his book has made “headlines” but those need putting into “context”, and he also states in the book his regret at the way the pair’s relationship has soured.

“Sadly, this feud has continued to the present day. The more I think about it, the more I understand why Alan behaves the way he does and continues to spread negativity about me whenever he can.”

Owen believes Shearer “made himself bigger than the club”, and there’s a detailed account about the pair clashing over the injury that left Owen on the bench for the final, relegation-confirming game against Aston Villa.

Owen says he feels Shearer made him the scapegoat for “failing” as manager at Newcastle.

My new book has made plenty of headlines this morning but they need to be put into context. I’ve stayed quiet for years whilst receiving plenty of criticism but there are two sides to every story. Once you’ve read the book you’ll make your own decision….