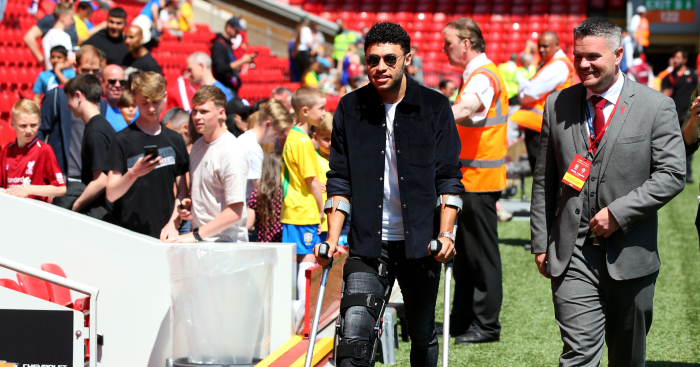 Liverpool’s Premier League title hopes could be boosted by the news that Alex Oxlade-Chamberlain could return to the first-team in March.

Oxlade-Chamberlain has been seen doing ball work on the Reds’ warm-weather training camp in Dubai this week, showing his encouraging progress.

The 25-year-old has been working with the club’s fitness and conditioning coaches and his return to full training could be just a month away, according to the Liverpool Echo.

That would mean if everything went to plan that he could be integrated back into Jurgen Klopp’s line-up before the end of the season.

Klopp had initially feared that the £35million signing would miss the entire campaign, but he is ahead of schedule, although the club will not take any risks with him.

Ahead of the Crystal Palace game last weekend, Klopp said: “Last time I put pressure on the medical department but when I see him moving with the ball it looks really promising.

“It looks completely without problems at the moment. I think we will see him this season.”

Oxlade-Chamberlain has been sidelined since he ruptured knee ligaments in the first leg of the Champions League semi-final against Roma at Anfield last April.