Home All The News Oxlade-Chamberlain responds to ‘devastating’ injury news 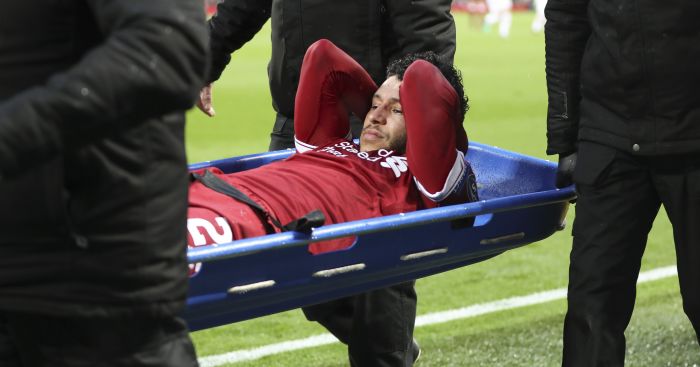 Liverpool midfielder Alex Oxlade-Chamberlain expressed his devastation at having his season ended by a knee ligament injury which will also rule him out of the World Cup.

The England international was carried off on a stretcher in the first half of the 5-2 Champions League semi-final first-leg victory over Roma on Tuesday night.

He underwent a scan on Wednesday which revealed ligament damage and Press Association Sport understands the 24-year-old called national team manager Gareth Southgate to speak to him personally about the injury and its implications.

Oxlade-Chamberlain wrote in a Twitter post: “Absolutely devastated to have picked up that injury at such a crucial time in the season.

“Gutted I won’t be able to play any further part now in our Champions League run for Liverpool, and also the World Cup with England.

“But now it’s all about supporting the boys and getting behind them. I know we have what it takes to do something special in this tournament.”

The club are not putting a time-frame on how long he is likely to be out for.

“Liverpool FC can confirm Alex Oxlade-Chamberlain’s 2017-18 season is over for both club and country due to a knee ligament injury sustained against AS Roma on Tuesday evening,” said a club statement.

“The 24-year-old was assessed by the club’s medical team at Melwood on Wednesday morning and no specific timescale is being placed upon his return to action at this stage.

“However, Oxlade-Chamberlain will now begin a rehabilitation programme to enable him to reach full fitness again as soon as possible, returning to action next season.”

The injury put a dampener on a thrilling Champions League win at Anfield with manager Jurgen Klopp saying after the match: “The biggest blow for the mood is the injury of Chamberlain because we lost a fantastic player.”

However, Oxlade-Chamberlain was able to keep the injury in perspective as he paid tribute to the fan whose condition has been described as critical after being attacked outside Anfield shortly before Tuesday night’s clash.

“However, this all pales in comparison to how the family of the liverpool fan badly hurt before last nights game must be feeling,” he added.

“My thoughts are with him and his loved ones.

“Thank you for all your kind words, messages and support. I’ll see you soon. #YWNA”