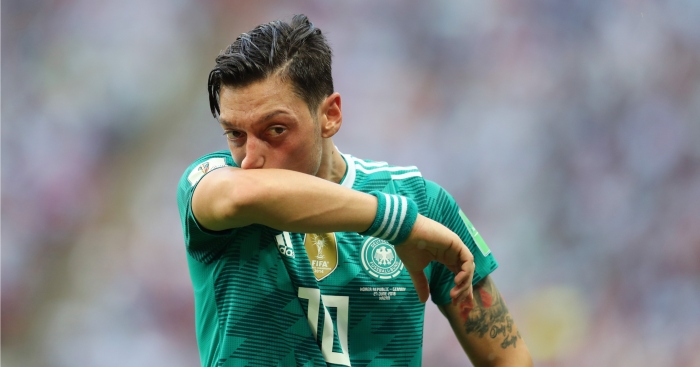 Mesut Ozil has no regrets over posing for a photograph with Turkey’s president Recep Tayyip Erdogan.

The picture, taken shortly before the World Cup, led to criticism of Ozil in Germany, with his loyalty to the national team questioned. Germany’s shock elimination in the group stages only served to add to the sense of ill-feeling.

Erdogan is a controversial figure, surviving an attempted coup in 2016. But Ozil, who is of mixed German and Turkish heritage, has insisted there were no political undertones behind the photograph, which also featured his international team-mate Ilkay Gundogan.

Defending his decision, the Arsenal midfielder, 29, said in a lengthy statement on Twitter: “The past couple of weeks have given me time to reflect, and time to think over the events of the last few months. Consequently, I want to share my thoughts and feelings about what has happened.

“Like many people, my ancestry traces back to more than one country. Whilst I grew up in Germany, my family background has its roots firmly based in Turkey. I have two hearts, one German and one Turkish.

“I’m aware that the picture of us caused a huge response in the German media, and whilst some people may accuse me of lying or being deceitful, the picture we took had no political intentions.

“Although the German media have portrayed something different, the truth is that not meeting with the president would have been disrespecting he roots of my ancestors, who I know would be proud of where I am today. For me, it didn’t matter who was president, it mattered that it was the president.

“My job is a football player and not a politician, and our meeting was not an endorsement of any policies.

“I get that this may be hard to understand, as in most cultures the political leader cannot be thought of as being separate from the person. But in this case it is different.

“Whatever the outcome would’ve been in this previous election, or the election before that, I would have still taken the picture.”