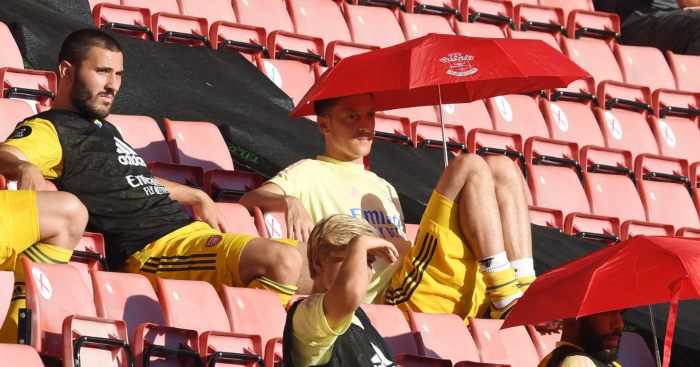 Arsenal head coach Mikel Arteta has told his ostracised players that they will start the new season with a clean slate.

Matteo Guendouzi did not play in the final 11 games of the previous campaign after an altercation with Brighton striker Neal Maupay following defeat at the AMEX Stadium.

The midfielder ended the season training away from the senior squad, while the club’s highest-paid player Mesut Ozil did not kick a single ball when football resumed after the halt caused by the coronavirus pandemic.

Ozil has stressed in a recent interview that he intends to remain at Arsenal despite his lack of game-time and, despite being linked with a move away from the Emirates Stadium, Guendouzi also appears set for a fresh start.

“I have been really clear that everybody starts from zero,” Arteta said ahead of Saturday’s Community Shield meeting with Premier League champions Liverpool.

“All the time in football, what you did two weeks ago or two years ago doesn’t matter. It is what you are able to contribute to the team now so everybody is going to have the same opportunities.

“They have to show with their performance and attitude that they are better than their team-mates or they are somehow contributing to what we want to achieve this season.”

Asked if he had spoken specifically to Guendouzi having publicly questioned his attitude, Arteta replied: “Yes. I told him exactly that, that he is going to be part of the team and at the moment he is like any other player in our squad.

“He deserves, first of all, to be treated exactly the same and I will do that to the best of my capability.”

Guendouzi will not be considered for the Community Shield having recently returned from France, where a mandatory 14-day quarantine period remains in place for anyone entering the UK.

The starting line-up against Liverpool is likely to closely resemble that which played in Tuesday’s 4-1 friendly win over MK Dons.

“We’ve had two training sessions so you can imagine that this game comes straight in the middle of our mini pre-season, but as well we haven’t had much time to lose a lot of the condition,” explained Arteta.

“Obviously it’s not an ideal moment to play in this final but the players are motivated. Obviously it’s another opportunity to win a trophy and we will go for it.”

With the likes of Pierre-Emerick Aubameyang, Bernd Leno and William Saliba all playing some part, it was Mohamed Elneny who opened the scoring at stadium:mk.

The Egypt international spent last season on loan at Besiktas and, despite being brought back into the fold, Arteta could offer no assurances that Elneny will remain in his plans on a more long-term basis.