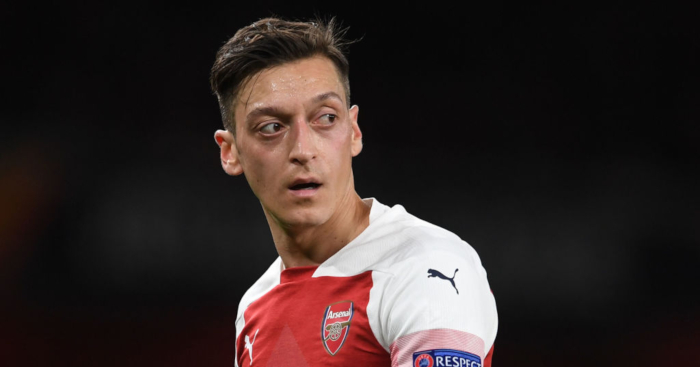 Playmaker Mesut Ozil has dismissed any suggestions that he could leave Arsenal in the summer.

The German is the club’s highest earner – on a reported £350,000-a-week – and has had a tricky time in Unai Emery’s first season as Arsenal boss.

There have been suggestions that he could leave the Gunners in the summer after being left out of some matches – but the former Real Madrid man doubts that will happen.

“I don’t think there’s a chance of that to be honest,” Ozil told DAZN Dach .

“I’ve got two more years here and what happens afterwards is not in my hands. We’ll see then, but I’m proud to be at this club and really happy at this club.”

Ozil added: “If the coach speaks to me and tells me I won’t play in a game it’s something I need to accept and just get on with it.

“I’ve carried on working on making myself as fit and healthy as I could and it’s worked out for me.  Now I’m playing, but of course it’s the coach’s decision if I play or not.

“I’ve had some injuries this season and I’ve had to miss some games. But I know when I’m fit I’ll play matches.

“I know the quality I have. I think everyone has their qualities and mine are at No.10.

“If the coach wants me to do something and play somewhere else, you have to accept it and do that. That’s something I’ve done and as a player and you just need to get on with what you’re told.”