Home F365 Says Ozil may not be what Arsenal need, but he’s far from useless 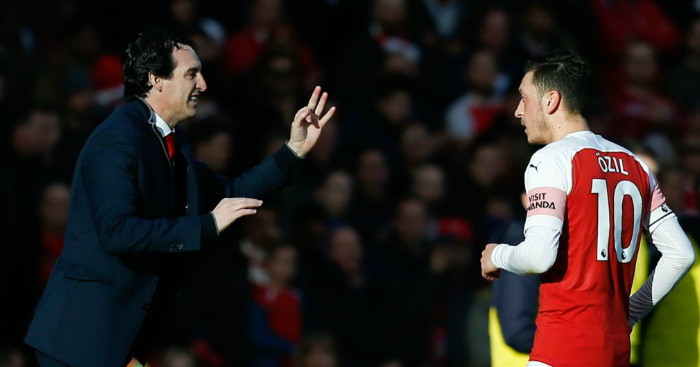 Sometimes, a story just writes itself. Coming into Arsenal’s 3-1 win over Burnley, the obvious angle to look for was around Mesut Ozil, a player who has missed most of Arsenal’s games this month with reported back trouble and whose value has been questioned by fans and, if rumours are to be believed, now too by his manager.

Apparently lacking access to Google, Unai Emery claims that he does not know or care what Ozil’s salary is, which may stretch credibility somewhat but is an understandable position to try and pretend to take, given that his job is to coach the players rather than to negotiate with them – a remit held by director of football Raul Sanllehi, who joined the club shortly after Ozil’s contract was last renewed.

Arsenal have generally good a good job of shedding their dead wood over the past year or so, with Arsene Wenger helpfully doing a bit of pruning prior to Emery’s arrival in the summer, and Ozil’s continued presence at the Emirates feels like it galls fans more for symbolic reasons that footballing ones.

With the likes of Alexis Sanchez, Theo Walcott, Jack Wilshere, Francis Coquelin and Olivier Giroud all sold and upgraded on by the likes of Lucas Torreira, Matteo Guendouzi, and brace-scorer Pierre-Emerick Aubameyang – all signed in 2018. They are far from faultless, as their defeats to Southampton and Tottenham over the past week clearly demonstrated; but there is also greater cause for optimism than Arsenal fans have had for some years.

As a result, Ozil now often feels like a man out of time – a vestige of an era of underachievement and stale football that has not yet been entirely banished since Emery’s arrival, but has at least been significantly refreshed on the whole, like that time you got a bit of minty shower gel in your bum.

Against Burnley, though, he provided a little reminder of the unique value he holds. Effective, incisive number 10s are difficult to come by, and there are few players in the game with the vision of precision that Ozil offers and which he especially demonstrated in the build-up to Arsenal’s 14th-minute opener, playing a delightful pass in behind the defence for Sead Kolasinac. It was a pass you would be proud to take home to your parents for Christmas, safe in the knowledge that it would turn up with a more-than-acceptable bottle of red for your parents and charm your stoney-hearted nan with its Jon Hamm good looks.

Ozil may not be what Arsenal necessarily need anymore: finding players with a greater willingness to scrap in and help with the defensive duties is clearly a priority for a side that has scored one more goal (40) than Liverpool (39) but conceded more than three times as many (24) as the league leaders (7).

But here, he was able to bring an element of incision to help them cut through what might euphemistically be called a ‘battling’ Burnley side – a task that Arsenal’s other luxury playmaker, Henrikh Mkhitaryan, singularly failed at against Bournemouth. Whether that kind of thing is worth £350,000 that might be better spent elsewhere is a matter of Emery’s priorities.

But that’s all by the by. This was not Ozil’s day, nor was it even Aubameyang’s, despite his double firing him back to the top of the Premier League goalscoring charts with 12 goals.

No: this is the injured Hector Bellerin’s world, and we’re all just living in it.

hector bellerin is either the man behind the gatwick drone or the detective who caught him pic.twitter.com/McRmP9Ets3