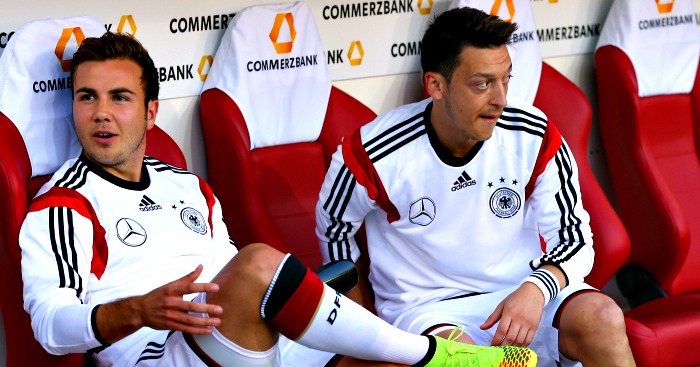 Mesut Ozil has hinted that Mario Gotze and Leroy Sane should consider moving to the Premier League.

Ozil joined Arsenal from Real Madrid in summer 2013 in a club-record £42.5m deal, and has been a success at the Gunners thus far.

With Gotze linked with Liverpool, and Sane a reported target of Manchester City, Ozil has intimated that his teammates should consider moving to England.

“What’s it like at Arsenal? What distinguishes the Premier League? How are the dealings with the media and public? These are questions I am asked [by teammates],” Ozil told Germany newspaper Bild.

“I can only tell them of my good experiences. The DFB benefits from the international experience of its players. I don’t have any worries if more players move abroad.

“German talents have an outstanding reputation and get into the focus of foreign clubs.

“But it will get more difficult for the smaller clubs to keep national team players, especially because of all the TV millions in England.

“On top of that the Premier League is just very interesting and attractive.”

The 27-year-old added: “It was always my goal to prove myself at the big clubs abroad. And I only have positive things to say about the Premier League if somebody wants to move abroad.

“The league is very interesting, very balanced – the best example being Leicester winning the title.

“It’s just a lot of fun to play football in England. It’s extremely exhausting, but you can relish it.

“If a national team player asks me what it’s like in England, I reply: ‘If you have the opportunity, do it!’ If I were to make the decision to go abroad again, I would definitely do it just like I did it.”