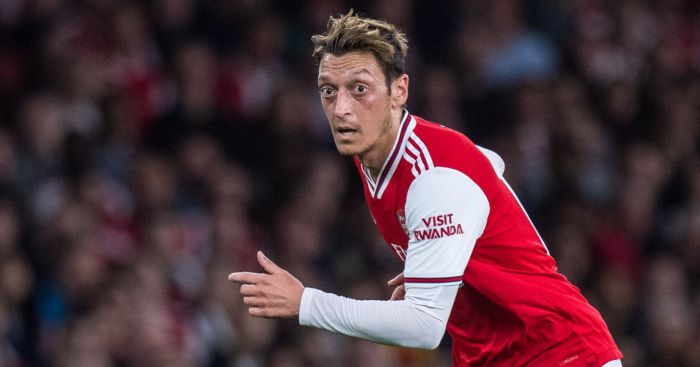 Mesut Ozil has slammed suggestions that he has downed tools at Arsenal since signing a lucrative new contract in 2018.

But the German has struggled since, starting just 27 of a possible 59 Premier League games.

His role has diminished even further under Unai Emery this season, being substituted by the 71st minute in his only two starts: the 2-2 draw with Watford and 5-0 League Cup victory over Nottingham Forest.

Emery has largely opted not to discuss Ozil’s absence in public, making a few notable exceptions of late. But head of football Raul Sanllehi’s recent claim that he “needs to contribute 24/7” and “there are others who are deserving more playing time” has increased the pressure on the 31-year-old.

“All I know is what has already been said,” Ozil told The Athletic.

“It’s disappointing, of course. But as a professional footballer, I have to respect the decision of the coach. Not being involved, watching from home, makes me feel helpless.

“I want to be part of the side, I want to support my team-mates to succeed. I’m not training all the time just for the sake of it, I’m ready to play. This should not be about me or the coach, only the club. I have to give everything, be fit and focused, and I’m training hard to be ready.

“Pre-season went very well and although things were disrupted by the attack, since then I’ve been fully available and when the coach has selected me I’ve been ready, played and always tried to give my best.

“I’ve trained at the same level my whole career but because I’ve not had minutes recently, I’m doing extra work with the fitness coach and in the gym to get even fitter than normal. I know what is needed and believe in myself.”

Ozil also described suggestions he had been putting in less effort after signing a new contract as “ridiculous” and “total rubbish”.

“If that was true,” he said, “why did I work so hard and positively during pre-season this year? And why, after the World Cup last year, did I return from holiday early for the first time in my career to start training three days before I was expected back?

“I did it for the new coach, the team and the club. Maybe people don’t like that I have a good contract? I don’t know or care.”