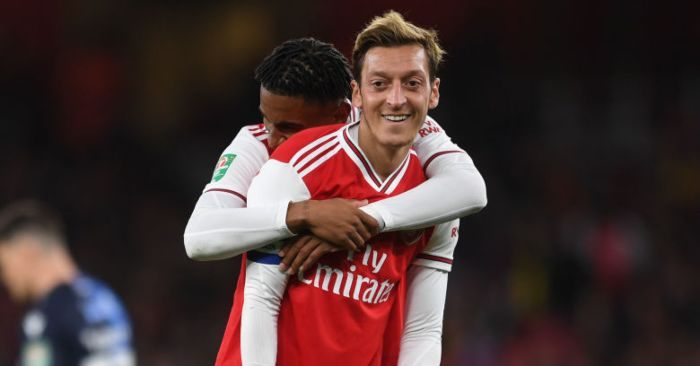 Mesut Ozil has defended his record in ‘big’ games and his tendency to miss matches through illness.

Ozil has long been criticised for his inability to dictate or change the course of games against Arsenal’s direct rivals.

In 42 Premier League games against Chelsea, Liverpool, Manchester City, Manchester United and Tottenham, the German has scored six goals and assisted nine, while three Champions League meetings with Barcelona have garnered none of either. He has scored twice and assisted once in seven matches against Bayern Munich.

The German says he is always blamed when Arsenal themselves perform poorly in such games, also pointing out that ‘small’ games “don’t really exist”.

“It always happens that an ex-player stands there on TV and criticises me,” he told The Athletic. “Others just continue the theme and it gets in everyone’s heads.

“If we don’t do well in a ‘big’ game, it’s always my fault. If that’s true, how do you explain our results in the ‘big’ games when I wasn’t involved? There’s no real difference. I know people expect me to offer more, dictate play and make the difference – I do, too – but it’s not that straightforward.

“I’m not the only player in the team and, don’t forget, some of our opponents are simply better than us. Also, what is a ‘big’ or ‘small’ game? In the Premier League, anyone can beat anyone. Look at Wolves and Norwich beating Man City, or Newcastle and West Ham beating Man United.

“So you can’t say my good performances only came in ‘small’ games because these games don’t really exist. The intensity is there in every match and often the ‘small’ teams raise their standard against the ‘big’ teams.”

Ozil also expressed his annoyance at being branded a ‘sicknote’ for missing matches through illness or injury.

“I also get really frustrated when I miss a game through illness and people question if it is genuine,” he said. “Yes, it happened a few times – usually in the winter – but what am I supposed to do? If you knew me, you would know it takes a lot for me to miss a game and I have never used sickness as an excuse. Actually the opposite. I played many games when I was ill or had injuries.

“Before the Champions League game against Bayern Munich [March 2017], I was sick and Arsene told me I was not in the squad because of that. The next morning, the guys from Arsenal called me and said, ‘Listen, you have to come to the stadium, you have to be in the squad’. Despite my illness, I joined the squad and played the last 20 minutes.

“Most players don’t play when injured or sick – it influences your game, you can’t give everything – but I was always available unless it was impossible.”