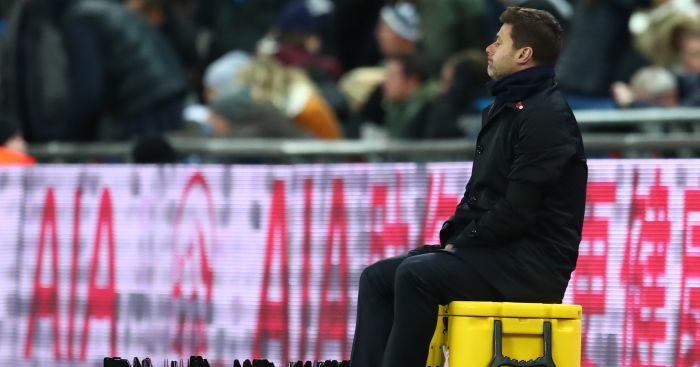 Timing. It’s all about timing.

Spurs (eventually) finishing their new state-of-the-art stadium at the precise moment their best team for 35 years reaches the end of its road. Timing.

Spurs announcing that their debt is set to spiral to £600m amid mounting stadium costs just as their manager admits he is at his lowest ebb in five years at the club. Timing.

Spurs producing an insipid, error-strewn display against the defending champions on a bumpy NFL pitch the day Real Madrid sack their manager. Timing.

Via misfortune and mismanagement Spurs currently stand on the brink, the hubris of those adverts declaring their new stadium as the ‘only place in London to watch the Champions League’ now writ large.

Where can I watch @ChampionsLeague in London @SpursOfficial ??? pic.twitter.com/5JJq4eVWDD

Tottenham’s shambolic handling of the stadium delays and failure to bring in a single player this summer have been dealt with ad nauseum, but if ever there was a day to really hammer home the parlous position they currently occupy, it was Monday.

This was an acutely embarrassing night for the club. Indeed, the only joy any Spurs fan could really take from the evening was the look on Daniel Levy’s face as he squirmed in his seat. He has taken the fans for mugs this season and his visible discomfort at the spectacle before him offered at least some Pyrrhic payback.

Appearances matter to people like Levy. In the political buzzword parlance of our times, the optics were bad. A poor performance against a prestige opponent on a travesty of a pitch scarred by and still marked up for the NFL.

Throughout 90 awkward minutes it was impossible to ignore the constant visual reminders of precisely where and how Spurs have gone wrong.

Wembley’s pitch was in that state specifically because of Spurs’ failure to get their own stadium ready on time. This was not an embarrassment for Wembley, or the Premier League, or the NFL. This is all on Spurs; the NFL games were on Wembley’s books long before Tottenham came cap in hand needing to move back in – while also palming an extra American football match originally slated for the new White Hart Lane onto the overworked Wembley pitch.

Then there were the Spurs players, shuffling around the broken pitch without invention or purpose. Did they believe deep down they could actually get a result even against this pale imitation of Manchester City? Damningly, it seemed not.

And then there was Mauricio Pochettino himself, sat looking absently into the middle distance like a man waiting for a bus that never comes.

Real Madrid sacking their underperforming manager the very same day really doesnot help Spurs. But this remains a mess of Tottenham’s own making and any club that causes all of Twitter to turn into that US Soccer Guy account for 90 minutes deserves only bad things.

There is still plenty of time and scope for this season to change, of course. Spurs could still in theory win the Europa League, while the fact that two-thirds of the Premier League remains awful means Spurs are only a point outside the top four and at the absolute worst will end this season in sixth place with a new stadium. Christian Eriksen is returning from injury and has been missed terribly, while Dele Alli also showed fleeting glimpses of his importance as a substitute on Monday.

But it seems far more likely that an era is ending, and with a whimper. It’s almost like Spurs have jumped from their perch among the elite before being pushed. They have not been picked off by the bigger boys a la Monaco. Of the players that lifted Spurs from also-rans to contenders under Pochettino, only Kyle Walker has left. Yet those who remain currently appear incapable of reaching those heights again.

Last season, Manchester City swept Spurs aside home and away with ruthless, clinical displays of their superiority over not just Tottenham but everyone else.

This was not that but, for Spurs, this was worse. Not just because the pitch was a bantermeister’s paradise and visual metaphor for the club’s bungled stadium move. This time City were there to be beaten. Last season, Spurs probably would have done so. The season before, they undoubtedly would have. And yet this Spurs team containing the same players never looked capable of such a feat.

The biggest single contribution made by the pitch was its role in Erik Lamela blazing a late chance over the bar. While it was possible to sympathise with the individual player, there should be no sympathy for a club that got what it deserved on Monday night. A painful, damaging and embarrassing defeat.