Home Mailbox Palace are ‘incensed’ by Arsenal’s offer for Zaha? F**k right off 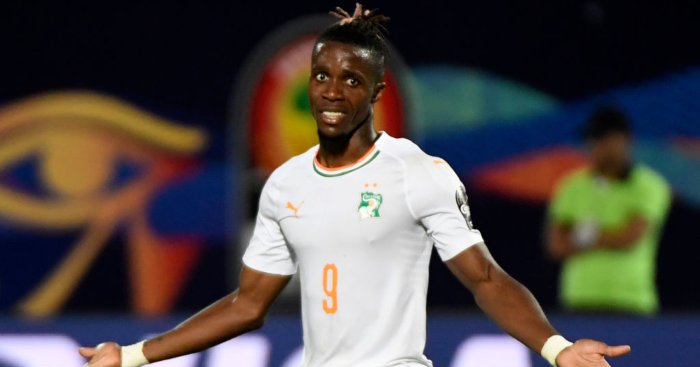 F**k off, Crystal Palace…
So Palace are ‘incensed’ by Arsenal’s offer for Zaha?  Well I’m ‘incensed’  (actually, I’m a just sick of shit) by palace getting £50m for a 21 year old full back.  Clubs need to get a grip.  There are only a handful of teams able to pay over the odds for a player and they only do so because a) they have the cash and b) they are desperate and don’t have the skills or people to find a similar or better player for less elsewhere.  the whole football world needs to get a grip.  Arsenal are taking a stand and reducing the amount they are prepared to pay.  As a fan, I for one laud it.  Because Man U are stupid and desperate enough to pay £50m for a player who isn’t worth it doesn’t set the benchmark for everyone else. If anything we should all be ‘incensed’ by Man U paying ridiculous money for players.  It makes me sick seeing stupid stupid amounts being paid to buy success in a f***ing sport.  Look out the window and see what’s going on around you. So palace, if you still want more money then f*** off and find it somewhere else. That’s your right. Incensed? F*** right off.  There are millions of things to be incensed about in this mad world.  Being made an offer for a footballer which you have the right to turn down is NOT one of them.
Ally, London.

So Wilfred Zaha wants to join a Champions League club, but wants to join Arsenal, a club who haven’t been in that competition for a few seasons and look no closer to doing so, Football is strange.

De Gea doesn’t want a new deal
Probably one of 100s of mails but Rami, London, sorry to break it to you but De Gea doesnt want a new contract at United…
Rob A (Ramsey was offered one but he didnt want it either…it happens) AFC

Rami, your mail made no sense. De Gea has been offered a new contract for a long time now. It is supposed to be a substantial increase in wages. He just won’t sign it and I can’t fault him, given how terrible our squad has been the last few years. He probably wants to win titles while at the peak of his powers, which looks difficult at United.

Secondly why the Wan Bisaka hate? Have you watched him every week and hence know the 50 mil was ridiculous? City paid 50 mil+ for both their fullbacks and 50 mil and it solved their defensive issues. Also 50 mil seems to now be the going rate for highly rated fullbacks. Would you prefer if he shopped in the bargain bin for a 5 mil fullback or another season of Ashley Young pretending he is a right back.

Lastly Rashford has been one of our best players and securing him to a new contract is a good idea. 250k might seem like a lot, but that is the going rate and United will have to pay it or risk him leaving as well.

There are plenty of reasons to attack Woodward and his shambolic transfer policy of years past, but buying a highly rated right back and securing Rasford to a new contract definitely aren’t one of them.
Jarron (Hoping Bruno Fernandes gets signed shortly), MUFC

In Reply to Rami, London I agree and disagree with you.

Firstly the signing of AWB is shrewd and is the type of signing we need to be making, a quality player with lots of room to grow, for a position where we are in dire need of some quality. Unfortunately 50m is the going rate for young English talent (ie Stones and Sterling).

The issue with the Rashford deal is how pisspoor our wage structure is at the moment! The consensus used to be that your best player got paid the most, but ever since Sanchez came in and stank up the place, it has caused issues because now we have a guy who is paid the most but is probably one of the worst. I would say outside of Sanchez our highest earners were or are Pogba, De Gea and Lukaku, which all make sense, with Lukaku being signed for 75m so him earning so much is understandable.

However our last 3 contract renewals we have been taken to the cleaners (Shaw, Martial and Rashford). According to Spotrac, Luke Shaw is being paid 150k p/w and Martial is on 250k p/w, now with Rashford on 200k, it makes you wonder who is doing the negotiating. Considering the wages some other players in the league are on (Mane 100k, Salah 200k, Sterling 180k, Son 140k and Kane 200k), you can clearly see we are overpaying. Now I understand overpaying for quality players but at the moment we are paying superstar money to mediocre players. I appreciate Rashford has immense potential but having never scored more 13 league goals in a season, is it wise to be paying him as though he is a superstar, the same goes for Martial. I cant imagine any other top 6 team willing to pay these kinds of wages. When we refused to pay Ander Herrera the 200k p/w PSG offered him I thought we turned a corner but it seems more of the same.

The first step for us getting back to the top is overhauling our wage structure, so that the more you get paid the more you contribute to the team, because otherwise where is the reward. Harry Kane scored 100 league goals before he was given 200k a week, Spurs have notoriously tight purse strings so that’s not the best example but my point is, you should earn an improved contract with your performance on the pitch.

I want nothing more for Rashford and Martial to succeed but success for them now is being our top scorers how Rooney and Ronaldo were, and for over 200k p/w its not absurd to ask for over 25 goals in return, is it?
Longsight Lad (Harry Maguire is Phil Jones with better PR)

By bidding £40M for Zaha, presumably with the strict caveat that they won’t pay a penny more, they allow themselves to steam in with a budget busting £40,000,001 bid which presumably the presume Palace will bite their hands off at. After all, it worked like a charm with Suarez and us back in ’13.

What truly are they smoking over there at The Emirates!?
Gregory Whitehead, openly mocking Arsenal FC for Suarezgate since 2013, LFC

A dream is a wonderful thing
Dear Aaron. CFC. Ireland, considering that you are a Chelsea supporter, I understand that it must be difficult for you to imagine why anyone would dream of playing for Arsenal.

You see, the thing you fail to see is that a club is much, much bigger than its current crop of players or current manger. I imagine that playing for a club you supported growing up, must be the ultimate dream. Had I the talent, skill and opportunity to do so, I would choose Arsenal over any club in the world, hands down. Supporting a club and wanting to be a part of its long history is a rather larger consideration than whether you will play with Mustafi or Xhaka, the latter 2 considerations being subject to change at any time over this transfer window or subsequent windows. The one thing that wouldn’t change though, is that you would be able to walk onto the pitch to represent a club you love, a feeling most of us can only dream of.

But again having said all that, I accept that as a Chelsea fan, all of this would be difficult to understand.

Hopefully one day you all will.
Pherain AFC

A token Championship email
Yes, it’s a the lesser spotted email about Birmingham.

It’s gone a little under the radar as we’re a middling Championship team nowadays but just to highlight that since the season ended we’ve:

Signed: One player, who was on loan last season.

Couple that with the fact that the laughable, fingers-in-ears approach to the the FFP rules last season (from people making the above happen) means we’re under massive pressure and will be unlikely to spend anything near what has come in. We don’t even know who owns us.

If any club can top this as a bigger ‘F-You’ to it’s fans since the start of the summer, then I’d love to be made to feel a bit better about the season ticket renewal I made before this all kicked off.

I guess there’s Coventry, but you know where they’re playing next season…

Where is the AI?
With all the crazy money in football, I do wonder when AI will be used to recruit players.

I mean surely the technology is there. You would just plug in data about the player’s age, fitness record, performances, chances of improvement, attitude, relative need for such a player in the squad, and the computer would tell you how much you should pay for that player.

I’m sure agents and players alike would hate such a system being routinely used but it may help the likes of Arsenal get their house in order and prevent us from signing the likes of Mustafi for £35m.

Apparently, we’re prepared to let Ospina, an international goalkeeper no less, for under £3m and think golden boot winner Aubameyang is worth around £50m, so we clearly don’t have a clue when negotiating transfer fees so it would be nice if we could tell a club ‘no, that’s what the player’s worth’ and have data to back that up.
Graham Simons, Gooner, Norf London