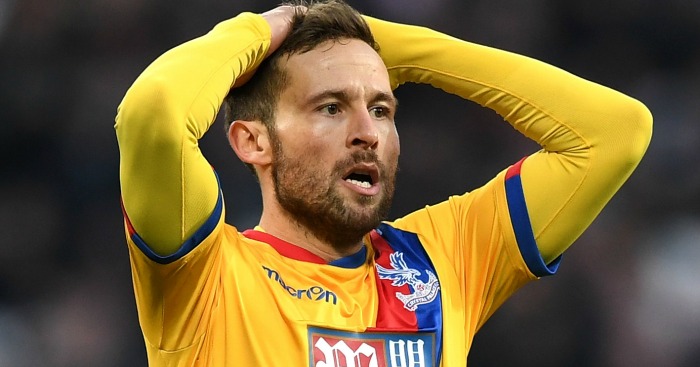 Crystal Palace plan further contract talks with Yohan Cabaye in an attempt to keep him at Selhurst Park beyond this summer.

The midfielder’s contract is due to expire but under Roy Hodgson he has enjoyed his finest season since he arrived as their £10million club-record signing in 2015.

Palace also face the return of the on-loan Ruben Loftus-Cheek to parent club Chelsea and the threat of increasing interest in Wilfried Zaha, potentially giving the 32-year-old Cabaye greater importance at a time when Hodgson knows he will receive offers from elsewhere.

“The club are obviously going to have conversations with Yohan, and his agent,” the 70-year-old said.

“I’ve had conversations with him; at the moment, you never know how those conversations are going to go, but what I will say about Yohan Cabaye is he’s done a very good job for us this year.

“He’s not missed many games, that’s for sure; he’s played an awful lot of minutes, and we’ve been successful. It’ll be a question of how his negotiations go with the club; he’s a really good quality player. He will have other options on the table because players of his quality get offers.

“I’ll have to wait and see how that pans out, but from a personal viewpoint I’ve spoken to Yohan about this. I’m more than happy with what he has done for us in the middle of the field this season.

“He and Luka (Milivojevic, also a central midfielder) have carried a big weight on their shoulders because for long periods of time we haven’t really had an awful lot of competition in that area, and they’ve been forced out there time and time again in very important games.

“He’s one of the players that we owe a debt of gratitude to this season because without them we wouldn’t be where we are.”

Hodgson has also spoken of his desire recruit Loftus-Cheek on a permanent basis, and ahead of Sunday’s visit of West Brom – which could yet conclude with his team climbing into the Premier League’s top 10 – he again has Jason Puncheon available following a long-term knee injury.

In addition to Cabaye, the contracts of Julian Speroni, Diego Cavalieri, Joel Ward, Bakary Sako, Chung-yong Lee and Damien Delaney are also scheduled to expire, and at least the latter two are then expected to leave.