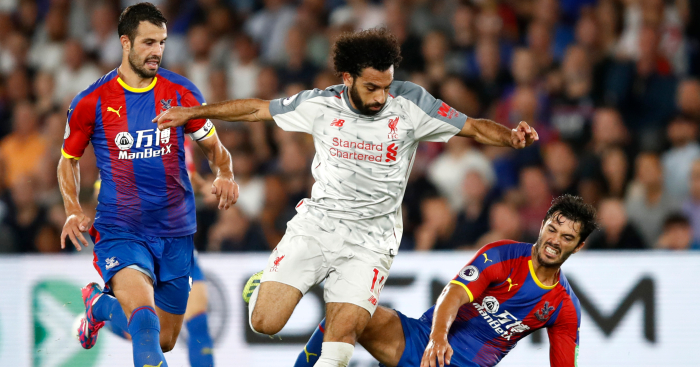 Crystal Palace’s Luka Milivojevic instructed Mohamed Salah to tell referee Michael Oliver to rescind the penalty he awarded to Liverpool after insisting the Egyptian had gone down too easily.

Jurgen Klopp’s team won 2-0 at Selhurst Park on Monday, when James Milner scored from the penalty spot and Sadio Mane secured all three points in stoppage time after Palace had been reduced to 10 men with Aaron Wan-Bissaka’s dismissal.

What had been a competitive affair changed on the stroke of half-time when Salah went down under minimal contact from Mamadou Sakho to earn the penalty which Palace manager Roy Hodgson has also since criticised.

Palace’s pursuit of an equaliser left them vulnerable to the counter-attacks that ended with Wan-Bissaka’s red card and Mane’s late finish, and midfielder Milivojevic said: “I told him ‘Say to the referee it’s not a penalty’. But he said it was. From his point of view it was a penalty.

“He fell down and for the referee it was a penalty. I did not see the contact on Salah. For me it was clear; it was not a penalty. That is football.

“This is not the first mistake in football. We were angry in the first minute but in football you do not have time to cry, we carried on, we tried in the second half. We had some good chances. Okay we lost, but we have to be proud.”

Milivojevic played for Serbia during the summer’s World Cup, where the use of Video Assistant Referee (VAR) technology helped influence similar decisions.

The Premier League remains the only major, top-flight division in European football in which VAR will not contribute to the refereeing of matches, but despite his sense of injustice Milivojevic said: “I do not want VAR in this league. In this country you have the best referees in the world.

“I do not think VAR will help. They are human beings, and they make mistakes sometimes. In his opinion he (Oliver) did the right thing. As players, we have to respect the referee. We are not a team who will cry over that penalty, we just carry on.”

Liverpool’s new-look central defensive partnership of Joe Gomez and Virgil van Dijk had been significant in them resisting another of the comebacks Palace have engineered under Roy Hodgson, and Van Dijk told the Reds’ official website: “It was very important to win here. We know how difficult it is to come here, so to win and keep a clean sheet as well, I’m a very happy man.

“We had very good moments but also moments that need to be better, especially in ball possession, but overall we need to be very happy that we won here.