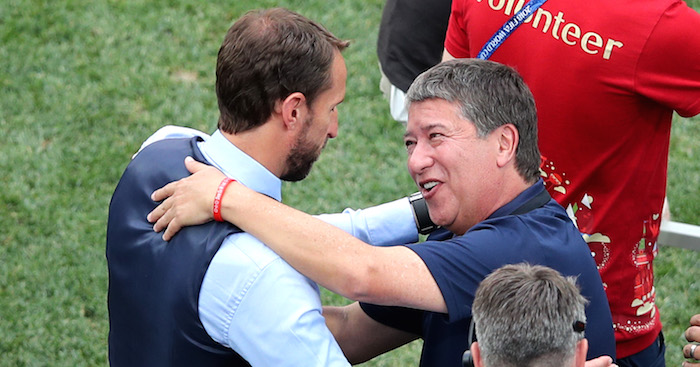 Nizhny Novgorod bore witness to a special afternoon for the Three Lions on Sunday as Harry Kane’s hat-trick, John Stones’ brace and a superb Jesse Lingard effort secured a 6-1 win and progress to the last-16.

“Well, I think that the difference of goals could have been more – we could have actually conceded more goals,” he said.

“As to our football, we’ve tried to play against England but there’s a huge difference between our two teams.

“To concede five goals in the first half, two penalties, two set-pieces, where England were very, very effective, well, what we did was try to avoid a bigger catastrophe.

“We managed to keep the ball in the second half a little bit more and we kept playing in an orderly fashion because had we not done that it wouldn’t have been six goals but far more.”

Gomez had no qualms about the two penalties England were awarded in the first half of a match, with the Los Canaleros boss saying his side “are virgins, we have been born before the due date”.

“But we were feeling rather frightened at half-time because of the huge difference between us and England, and also Belgium.

“We have learned a lot at this World Cup so far. We’ve drawn a lot of conclusions but Panama are a small, young child in football, other teams don’t really decipher our style of play.

“There was three or four goalscoring opportunities where we could have scored, but we didn’t finish properly, and England came to our box seven times and scored six.”

Substitute Felipe Baloy made history by become the first Panamanian player to score at a World Cup at the end of a second half that begun with Gomez making a beeline for the England dugout to speak to Southgate.

“I congratulated him,” the Panama boss said with a smile. “I told him that I really like his team, England, and I said, ‘Look, we’re going to play cool and calm now’.

“I tried to during half-time to tell my players to be more composed, to play football in an orderly fashion so I congratulated Southgate.

“I’ve had to play against two spectacular opponents, Belgium and England, but this is absolutely fantastic because that is how you learn, draw conclusions and can tell where your team is.

“I think England are totally spectacular – a beautiful team.”