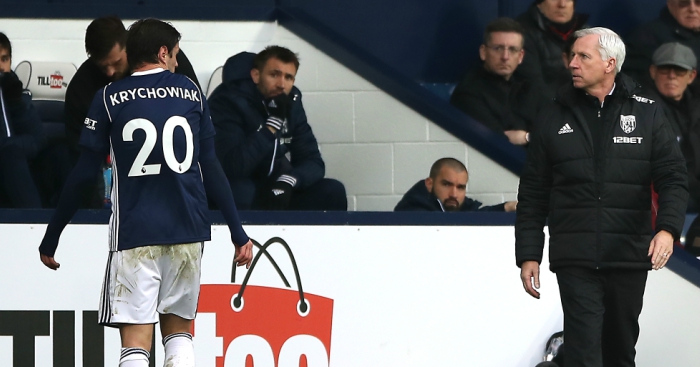 West Brom have fined midfielder Grzegorz Krychowiak for his reaction to being substituted last week, manager Alan Pardew has announced.

The Poland international vented his fury at Pardew after being taken off in the second half of the Premier League bottom side’s 4-1 home loss to Leicester.

Pardew now considers the matter dealt with and the 28-year-old will be back in contention for Saturday’s trip to Bournemouth.

Pardew said: “Grzegorz came and apologised to me on Tuesday, and to my staff, which is unusual to be honest.

“I said sometimes an apology isn’t quite enough, so I fined him and also said I don’t ever want to see it again. The selection of the player won’t be influenced after that. I told him how disappointed I was, fined him and we moved on.

“I actually really like him as a person and as a footballer and I was surprised at his action. I said, ‘You need to see the start of the second half and if you see yourself you might have subbed yourself’. He had a little chuckle.”

More from Planet Sport: Serena and Venus Williams at Indian Wells: From being booed to ‘feeling the love’ (Tennis365)