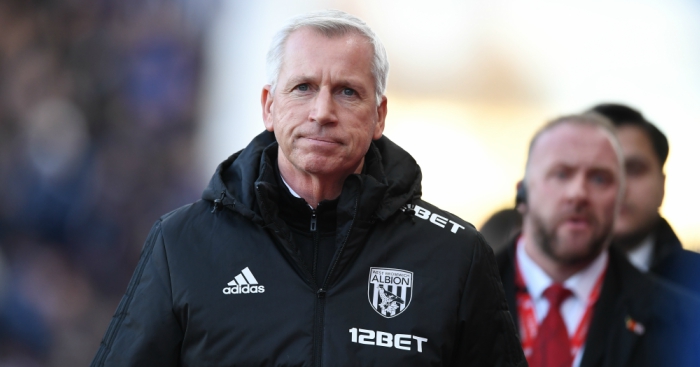 Alan Pardew has left West Brom by mutual consent after winning just one Premier League game in his fourth-month spell as head coach – a run that has left the club facing relegation.

The Baggies lie bottom of the table, 10 points adrift of safety with only six games of the season left, and Saturday’s 2-1 defeat at home to Burnley was their eighth top-flight loss in a row.

A club statement confirmed Pardew and assistant head coach John Carver had departed the club, with first-team coach Darren Moore placed in charge of the first-team “until further notice”.

“The club would like to thank Alan and John for their efforts and wish them well in their future endeavours,” added the statement.

Pardew was appointed the successor to Tony Pulis on November 29 with the midlands club one point above the drop zone but the former Newcastle and Crystal Palace boss was unable to transform their fortunes.

It was not until his ninth game that he claimed his first win – in the FA Cup at Exeter – while a 2-0 victory over Brighton on January 13 was the only league triumph of his tenure.

They edged out Liverpool at Anfield 3-2 in the FA Cup towards the end of January but have lost every game since then – their cup aspirations ended by a home defeat to Southampton.

They had taken the lead against Leicester and Bournemouth in recent weeks only to lose, and the setback to Burnley, in only his 18th league game in charge, appears to have been the final straw for both the club and Pardew.