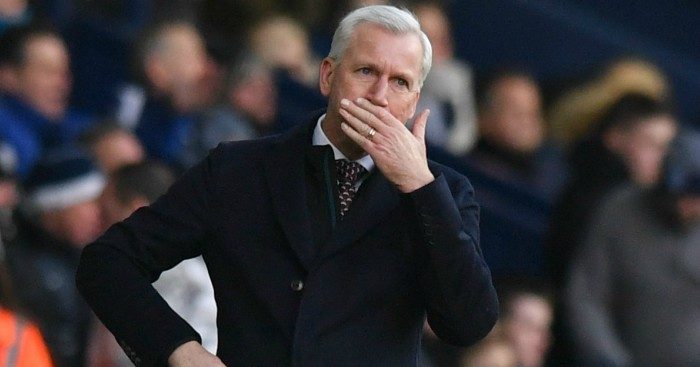 Alan Pardew admits a “bitty, messy” defeat to Huddersfield leaves West Brom with a mountain to climb if they are to avoid relegation.

Goals from Rajiv van La Parra and Steve Mounie gave Town the points as the hosts remain rooted to the foot of the table, seven points away from safety.

With one win from 14 games, Pardew was left deflated after the final whistle.

“I was disappointed with the performance,” he told the BBC. “We worked hard this week and looked good going into the game but it wasn’t reflected in the game.

“Huddersfield knock you out of any rhythm with the way they play and it was a bitty game. We didn’t really have any passages of play. It was a messy game, which they are good at. They get into your face and with the confidence we have maybe it affected us a bit.

“We have two or three flair players missing but we should have had enough to beat Huddersfield really.”

“I think it is three wins in 37 games. It is a problem, we just have to find a way to win a game, however it comes and however ugly it is. It was certainly ugly today.”

When asked if he is expecting to have any conversations with the Baggies hierarchy over his future, Pardew replied: “Not that I am aware of, no.”