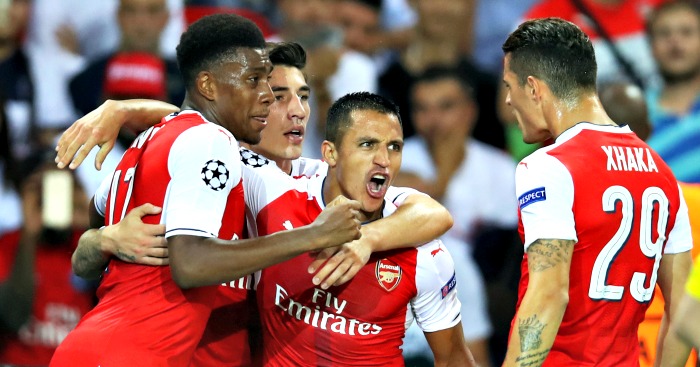 Arsenal have the collective efforts of David Ospina and Edinson Cavani to thank for a 1-1 draw with Paris Saint-Germain.

The Gunners got off to the worst possible start when Cavani headed the hosts ahead inside a minute, but he would go on to waste a number of gilt-edged opportunities before Alexis Sanchez struck to snatch a 1-1 draw.

There was late drama as Arsenal substitute Olivier Giroud tangled with Marco Verratti in an off-the-ball incident which saw them both sent off by referee Viktor Kassai.

Arsene Wenger spoke in the last week about the maturity of his squad and they certainly showed their steel to take a share of the spoils from a game they could easily have lost by a significant margin.

Wenger opted to field Ospina in goal, but, after speaking on the eve of the game of the need to start the Champions League campaign well, the Colombian was picking the ball out of his net after just 41 seconds.

There was nothing Ospina could do as Cavani rose unmarked to head home Serge Aurier’s pinpoint cross.

It could have been worse for the Gunners were it not for a superb block by Laurent Koscielny. His defensive partner Shkodran Mustafi gifted possession to the hosts, who cut through their opponents courtesy of superb touches from Cavani and Angel Di Maria, but Adrien Rabiot saw his effort stopped by Koscielny.

Ospina was then forced to tip over a Di Maria corner as the former Manchester United winger appeared to shoot directly from the set-piece.

Alex Iwobi had Arsenal’s first chance, but his shot was blocked behind for a corner.

Cavani then spurned two glorious opportunities to put clear daylight between the sides.

First he beat Koscielny to a loose ball after Nacho Monreal had cut out a through pass and rounded the onrushing Ospina, but could only fire wide.

The Uruguay forward, looking to star in a PSG side which lost talisman Zlatan Ibrahimovic in the summer, then fluffed his lines when in behind following a pass from Maxwell.

Arsenal started the second half on the front foot, but Aurier was running riot down the PSG right and another great cross was turned over by Blaise Matuidi.

Wenger had seen enough and turned to his bench, introducing Giroud in place of the ineffective Alex Oxlade-Chamberlain.

But it was still the Ligue 1 champions creating the majority of the chances.

Di Maria turned two defenders and played in Aurier, but Opsina was quick off his line and smothered the resulting shot.

And he was on hand again moments later to keep our Cavani after a couple of fortunate deflections saw the ball break to the striker.

He then saved from Di Maria after inadvertently setting up another PSG attack with a poorly-placed pass.

Wenger was planning to introduce Lucas Perez, but his side were soon level.

Mesut Ozil, who had endured a frustrating night up to this point, flashed in a low cross from which Iwobi’s drive was kept out by PSG goalkeeper Alphonse Areola, but the ball found its way to the feet of Sanchez, whose shot arrowed into the net to bring Arsenal level with 12 minutes remaining.

Ospina did well to dive at Cavani’s feet and push the ball away before he could get a shot in, with the hosts stung back into action by the equaliser.

Areola then pushed away Iwobi’s attempt as the game opened up in the closing stages, but the end was marred by an unsavoury incident which saw both Giroud and Verratti dismissed.