Home All The News Parker: We don’t owe Mourinho (or anyone) an apology 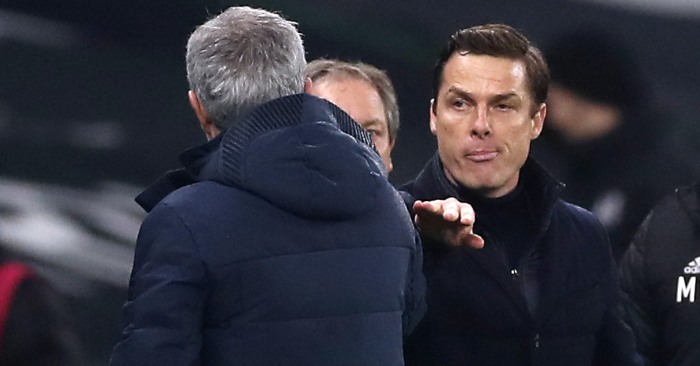 Scott Parker said Fulham do not owe anyone an apology after they made light of their fury at having to play Tottenham at just 48 hours notice by earning a deserved 1-1 draw.

Parker called the Premier League’s decision on Monday to cram this rearranged game into the Wednesday night slot “scandalous” (which was ridiculous) after a recent outbreak of coronavirus at the club, yet Spurs counterpart Jose Mourinho said the Cottagers should have to say sorry to everyone if they named a strong team.

They did that, with 10 of the players who played their last Premier League game on Boxing Day in the starting line-up, and Parker was rewarded with a performance that he described as “immense”.

They fell behind to Harry Kane’s first-half header but put up a spirited response after the break and earned a worthy point through Ivan Cavaleiro’s 74th-minute effort.

Former Spurs midfielder Parker, who also played under Mourinho at Chelsea, was in bullish mood after the game.

“Myself and this football club owe no one an apology because you can talk from the outside and people can see what they want to see and work out what the script was but it was far from that,” he said.

“There were two players on that pitch that had trained one day, come back from Covid and had one day’s training. Players had three or four days of training.

“The issue was never about only having two days to prepare for it. I understand that. The issue was 16 days ago this game was scheduled in, since then 10 positive cases of Covid, staff as well, and then 9.30 on Monday we got told that we were playing in the game.

“People need to understand the predicament we were in. We are not making it up. We have been very open and had worries for the safety of others too.

“That was my worry, so we don’t need to apologise for anything. We came here with a performance and we go away with a pleasing result.

Mourinho had little sympathy before the game for Fulham and even after the match suggested they knew for a long period that this fixture could be played.

“Look, I truly believe, I have to believe and I know the top hierarchy at Fulham Football Club and we’re dealing with honest people and of course they had problems,” the Portuguese conceded.

“Of course the reason why we didn’t play the game when we should, there were reasons for that. Let’s put that very, very, very clear.

“The reason why they were not happy to play today is a different question you have to ask Scott not me. But in the football world it’s very difficult to keep secrets.

“Aleksandr Mitrovic is not a Covid situation, [he] had a small injury from the last match.

“We knew that so it’s something you have to ask Scott. But make things very, very clear. Of course they had problems and of course there was a reason for them not to play the game a couple of weeks ago.”

A long night for the visitors looked on the cards when Kane put Spurs ahead with his 18th goal of the season, coming after a string of missed chances by the hosts.

Son Heung-min hit the post when through on goal and then Cavaleiro delivered an all-too familiar gut punch, making it the same old story – a game of early domination, missed chances and ultimately dropped points.

That is six points lost from winning positions just at home this season and that will ultimately cost them any real shot at the Premier League title.

Mourinho pointed to the missed chances, but also suggested his defence was not individually good enough.

“This is the same story basically since the beginning of the season,” he added.

“We can talk about not killing the game yes, we can speak about that, and today was a clear situation where we could and should have killed the game in the first half but then you go back to the goals that we concede and it’s not also easy to assimilate that.