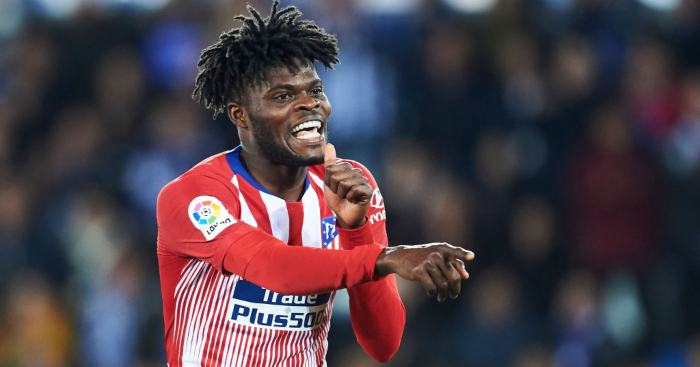 Thomas Partey’s dad has claimed that the Atletico Madrid midfielder wants to move to England amid reported interest from Manchester United and Arsenal.

The Ghanaian international has been linked with United as a replacement for the outgoing Ander Herrera, but the Red Devils and the Gunners face competition from Italy, where Inter Milan are interested.

Partey’s agent recently confirmed that there have been no bids for the 25-year-old, who has four years left on his contract – but now his dad says his son wants to move to England.

“I personally told him to move on, if he is not wanted at where he is right now,” Partey‘s father told Enigye FM.

“Because he might be wanted at somewhere else and so he will like to move to England if he gets the chance.”

But Partey himself is uninterested in rumours for now as he is hoping to lead Ghana to Afcon glory this summer.

“It’s hard for me to talk about transfers because the next minute it will be like ‘Thomas is trying to leave’ but for me playing football is what makes me happy,” Partey recently told BBC Sport.

“I keep saying I am lucky to be at this level now because I know people who play harder and work harder than me but are nowhere close to being here.

“I don’t know what the future holds for me but as long as I play and they are happy with me here then there is no need flirting with others.

“So the only thing that would make me unhappy will be not playing.

“I think most footballers can understand that not playing is the greatest torture any professional footballer can go through.”