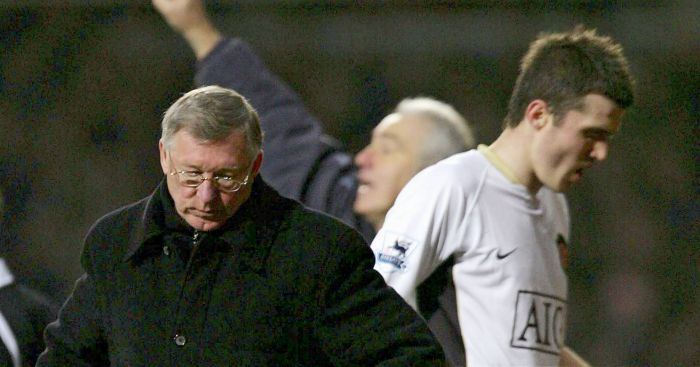 Michael Carrick has revealed the moment Sir Alex Ferguson ‘went bananas’ at him in an expletive-laden rant.

In his autobiography, serialised by The Times, Carrick recalls that he ‘didn’t get many bollockings off’ the legendary manager.

But the former midfielder remembers one instance during the 2008 Club World Cup final, when Ferguson laid into him for not passing forwards.

‘Thank God I didn’t get many bollockings off the Boss because he could peel paint off a wall from 100 yards, but I did receive a blast in Yokohama,’ he writes. ‘I thought I was playing well against Liga de Quito, the Ecuadorean side, in the 2008 final of the Club World Cup, but when I came into the dressing room at half-time, Sir Alex went bananas.

‘He was on my case a lot at that time about my passing. “Pass forward, pass forward,” he’d shout.

‘When the Boss got something in his head, it stayed there. In that [first] half, all my passes went forward, except one when I turned and passed back to Rio. I wasn’t being negative, it was simply the best option, and my only intention was to pass to Rio, get it back and build again.

‘Once Sir Alex saw that one back-pass, something flipped and I heard him going mental on the line, “F***ing hell, will you just f***ing pass it forward?” I snapped, shouting, “F***ing what?” Not directly at the Boss, I wasn’t brave enough for that. Two minutes later, the ref, Ravshan Irmatov, blew for half-time and I knew what was coming.

‘The moment I entered the changing room, the Boss launched into me. “Pass the ball f***ing forward, I f***ing told you,” Sir Alex was raging. When he was like that you had to sit there and take it, let him blow off some steam.

‘On the outside, I was calm, nodding at the Boss’s points, hiding my anger. On the inside, I was fuming and saying to myself, “I must have played 40 passes forward here and he’s picked one where I’ve gone back.” But the Boss was so wound up that I didn’t dare voice my defence.

‘”F***ing hell, a bit harsh, isn’t it?” some of the lads said on the way back out. The Boss didn’t take me off, he very rarely did as he always gave players a chance to respond. I think he was picking a fight to keep me on my toes. Early in the second half, Vida got sent off but we ground it out and managed to nick a 1–0 win with Rooney’s goal after I’d played the ball to Ronaldo – a bit of a forward pass as well, which was ironic.’