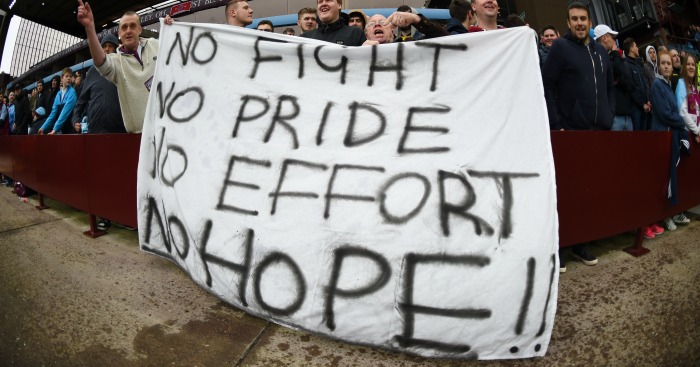 Harry Redknapp believes Aston Villa are “heading straight for League One” but insists Randy Lerner isn’t to blame for the club’s plight.

Only Norwich’s failure to earn a point at Crystal Palace on Saturday delayed confirmation of Villa’s relegation from the Premier League, with the managerless club having lost 2-1 at home to Bournemouth.

Protests against owner Lerner have gathered momentum, but Redknapp has absolved the American of blame, likewise sacked managers Tim Sherwood and Remi Garde.

“As I watched the highlights of Aston Villa’s latest defeat I thought: this side could well be in the Championship for just a season – because the way they’re going they’re heading straight for League One,” Redknapp wrote in his Daily Telegraph column.

“If I had to think of one word to sum up Villa’s season it would be ‘pathetic’. They have been absolutely awful, and the atmosphere has been getting worse as relegation has become inevitable.

“You can’t blame the fans though. After all, they’re paying their well-earned money to watch a team that doesn’t just get beat – they get slaughtered.

“But who is to blame? The fans are pointing the finger at Randy Lerner, the owner, but I don’t think he is the problem. Lerner has spent good money during his time at Villa, but it’s been spent very, very badly.

“Others say Tim Sherwood and Remi Garde were at fault, but as a manager you can’t do your job if the players aren’t up to it – and Villa’s aren’t.”

Ex-Tottenham boss Redknapp suggests the blame should be aimed at the club’s transfer committee, with former manager Sherwood revealing in November that he did not have the final say on signings.

“I look at their team and I don’t know who half the players are. They’ve brought in all these players – particularly from France – who just aren’t good enough,” he added.

“If I were Lerner I’d be conducting an inquiry into every deal and finding out who signed off on them – and then make sure they were out of a job, a process which sounds like it has started already with a number of boardroom changes already confirmed.

“Bringing in all these average players creates two problems. The first is that relegation is inevitable. The second is that it makes it very, very difficult to get out of the Championship. The reason for that is that you have to shift all these players on big wages to give yourself a chance – and who on earth is going to take them?

“Jordan Ayew looks a decent player, and I think he’ll get a move away from Villa this summer. But can you say the same about any of the others?

“I can’t think of another player in that squad who will get a move back to the Premier League, which means they could go into the Championship with a squad of players on serious money who are happy to wait out the remaining two, three or four years of their contracts.

“Villa desperately need to change the atmosphere around the place – though I don’t think they’ve any chance of being promoted at the first attempt. The whole club needs rebuilding, and that doesn’t happen overnight. It’s incredibly sad to see, and is just such a shame.”