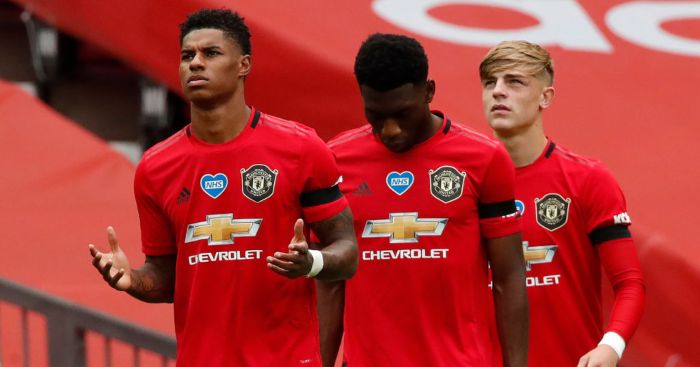 While well short of some of the displays they have put in after the coronavirus suspension, teenage star Mason Greenwood scored as Man Utd came from behind to secure a draw.

Pogba’s handball allowed Michail Antonio to give David Moyes’ visitors a surprise half-time lead, but the 18-year-old’s latest strike secured a point which could pivotal in the final shake-up.

OPINION: Man Utd are running on empty but might have enough fuel left

Gary Neville highlighted the Pogba handball in commentary, he said: “He’s in trouble, Paul Pogba, he’s in big, big trouble. He’s given a penalty away, he’s put his arms up and pretended it’s hit his head.

“To think, I felt a little bit sorry for him, I thought he took a whack in the head. Embarrassing. You don’t do that, you take it in the grid.”

However, Evra thinks that Rashford – who was substituted on 85 minutes for Odion Ighalo – deserved more criticism for his showing against the Hammers as he had a “poor game”.

“Like I said, it will be a tough game before the game started (against West Ham),” Evra told Sky Sports.

“I’m disappointed with the result and with some players performance. People are pointing at Paul Pogba using a lot of harsh words like embarrassing. But I didn’t see any harsh words used on Marcus Rashford because Marcus Rashford had a poor game today.”