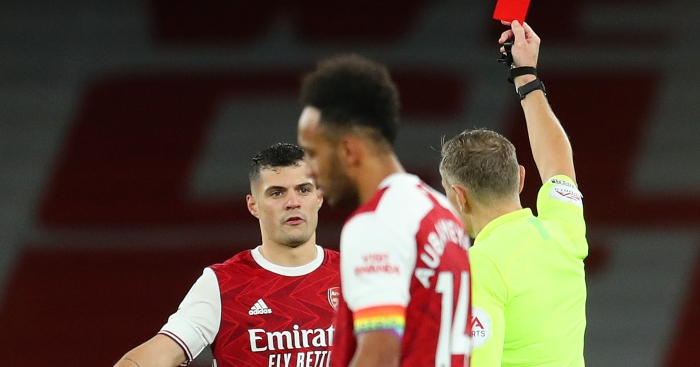 Patrice Evra has revealed that Thierry Henry once turned off the TV rather than watch Granit Xhaka captain Arsenal.

Xhaka made a show of himself in Arsenal’s latest defeat – their fourth in succession – by getting sent off just before the hour mark for grabbing Burnley’s Ashley Westwood around the throat.

The Gunners went on to lose 1-0 courtesy of Pierre-Emerick Aubameyang’s own-goal, leaving Mikel Arteta’s side in 15th place in the Premier League having scored the fewest number of goals at this stage of the season since 1981-82.

Xhaka was Arsenal’s captain until last year when he was stripped of the armband for his reaction to being jeered when he was substituted by former boss Unai Emery.

The Switzerland midfielder appeared all set to leave the Emirates until Arteta was appointed and convinced him that he could play a major role in the new manager’s rebuild.

But his latest indiscretion will see the clamour to axe Xhaka increase once more and Evra, while analysing the game for Sky Sports, offered an insight into how Henry, an Arsenal legend, views the 28-year-old’s qualities.

“I will tell you a quick story,” Evra said. “Thierry Henry one day invited me to his house to watch an Arsenal game.

“He turned on the TV, the first image we saw on the screen was Xhaka leading the Arsenal team, being the captain. Thierry Henry turned off the TV.

“I said, ‘What happened?’. He said, ‘I cannot watch my team and Xhaka being the captain of my team’ and he turned off the screen. And we did not watch the game.”