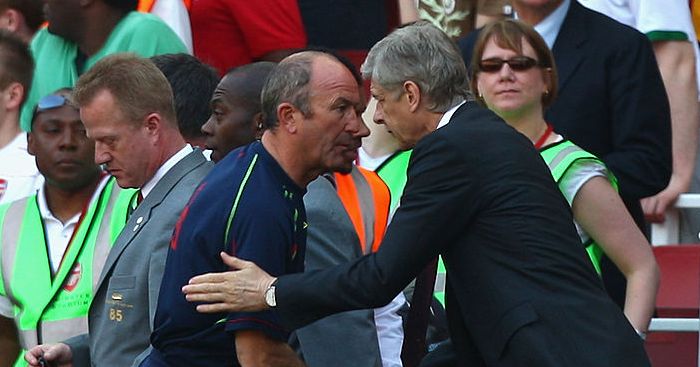 Arsenal manager Arsene Wenger tried to ban throw-ins while facing Stoke, who were “the only club” he “actually talked about and worked on before”.

Wenger faced Stoke 22 times as a manager, with 20 of those meetings coming in the Premier League and 12 against Tony Pulis.

He lost his first league game against Pulis in November 2008 and often struggled to cope with their more physical game.

Wenger’s record against the Welshman was P12 W7 D2 L3, and Pulis says former Arsenal captain Vieira once told him that “we used to hate going to Stoke”.

“I always want angles to get players motivated, to put fire into their bellies and something for the supporters to feed off,” he told That Peter Crouch podcast.

“He was avoiding the question of how could a team with much less talent than Arsenal, who don’t spend anywhere near as much as Arsenal, who haven’t got the facilities and capabilities of Arsenal, keep beating Arsenal.

“Patrick Vieira told me at a coaching conference: ‘We used to hate going to Stoke. You were the only club that Wenger actually talked about and worked on before. We just couldn’t beat you.’

“Wenger came one year and complained about the grass being too long. He wrote a letter to the FA.

“The referees and the linesmen had to come and measure the grass. I know he talked about banning throw-ins and saying they shouldn’t be allowed. That was all music to our ears.”

Vieira actually left Arsenal in 2005 so only played for the Gunners against Stoke once, in a 2-1 FA Cup third-round win in January of that year. Hmm.