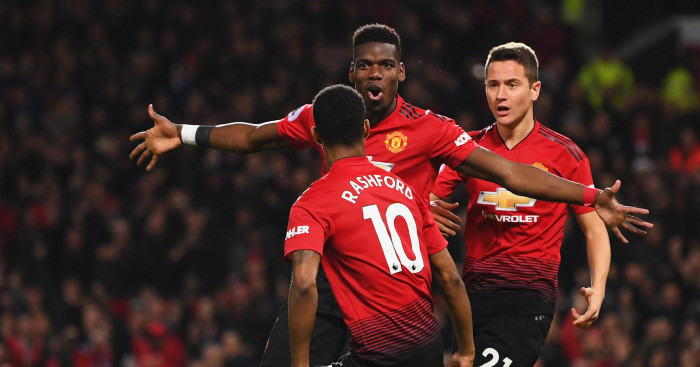 Every year around this time, I get the vague feeling that the quality of play declines a little during the festive period. Fixture congestion and all that. So I looked at some numbers, and found that in the past five years, league-wide pass completion percentage has consistently dropped about 1-2% in the holiday fixtures. To which I say: who cares? Let’s watch more football.

It was one of those weeks without much from the wide positions, so no full-backs or wing-backs. The formation’s a bit lopsided too, because one of the wingers really played winger, while the other was a cross between winger and attacking midfielder. But who cares? Let’s watch more football. And did I mention that the team in 18th has more representatives than the team in first? It’s a 3-3-3-1:

Goalkeeper: Neil Etheridge (Cardiff City)
How relieved must Neil Warnock be that the Philippines have decided that Cardiff City’s battle for survival is more important than their Asian Cup campaign? Very relieved indeed. Against Leicester City he was spectacular, with top saves diving to both his left and right, and one coming off his line to block. He also dealt comfortably with crosses, and at one point came well out of his area to sweep . Almost forgot – he saved a penalty kick too, his third of the season. Despite that, Cardiff are lower than evens with most bookies to go down.

@oilysailor Neil etheridge's 3 saved penalties this season have been from players who share a name with a former US president: Wilson, Kenedy, Maddison.

Alex McCarthy was a close second, with several fine stops against Manchester City, a strong-arm reaction save from David Silva the best of the lot. Still, check out Agüero’s goal, and ask yourself if he could have done better.

Centre-half: Paul Dummett (Newcastle United)
Move over, VVD. The man with four caps for Wales (how many of you knew that?) delivered one of the great individual performances of the season. Playing on the left of a three, he completely shut down that side of the Watford attack. He cleared everything, blocked crosses, got in the way of passes, made a few tackles, and moved into the middle several times to do the necessary.

To cap the afternoon, with Newcastle desperately holding on for a point, he made two potentially game-saving plays. In the 85th minute, he blocked Abdoulaye Doucouré’s through ball for Roberto Pereyra, and in the 90th minute he made a perfect tackle on Pereyra in the area. I’d say he’s a god, but he lost one of two aerial duels – deliberately, I’m sure.

Centre-half: Lewis Dunk (Brighton & Hove Albion)
Obviously, the key to great defence at Brighton is to get yourself red-carded and come back rested. In midweek Shane Duffy returned from three games off to have a fine match; on the weekend Dunk took advantage of his short ban to have one even better. It was a real Dunk match, too, as he roamed at will, with almost all his big plays coming outside the area. Not once did he make the wrong choice. At the very end of the match, he was outjumped on a set-piece by Kurt Zouma, who hit the bar. But I didn’t dock him for two reasons: 1) Zouma would outjump Dunk 10 times out of 10, so it’s not his fault that he got stuck in that position; 2) Dunk’s shirt was actually being pulled at the time – by Duffy!

Centre-half: Ben Mee (Burnley)
Not to cast aspersions or anything, but is it unfair to point out that Burnley played easily their best defence of the season with Tom Heaton finally in goal? Instead of that guy who used to be England’s #1 – you may have heard of him? Mee was the pick of the defenders as Burnley stalled the Pellegrini-to-Manchester-United express without much difficulty. Just did his usual job unerringly – although you could say he erred when Andy Carroll slipped in for a late late header that Heaton saved brilliantly. I read it as Carroll getting inside the full-back, plus a perfect cross for the big man that Mee could do nothing about. If Heaton isn’t between the sticks on Wednesday, call the cops.

All three Wolves defenders – Ryan Bennett, Conor Coady, Willy Boly – get honourable mention. None stood out, but each did their party pieces as Tottenham bit the dust. Sol Bamba had a characteristically erratic match, which included several spectacular interventions down the stretch, including a last-ditch clearance on a penalty kick rebound. He’d encroached before the shot was taken, but doesn’t everybody?

Camarasa will get the headlines and deservedly so, but I’ve never seen someone over perform so consistently like Sol Bamba, absolutely colossal that man

As noted, no full-backs or wing-backs this time around (by the way, what’s happened to the Marcos Alonso who got three shots a match?). Charlie Taylor and Bernardo both got stronger as their matches went on, playing timely defence and getting forward a few times. Bruno Ecuele Manga did the defence bit without the getting forward.

First: all we’ve heard for the past two years is that he isn’t the type to dominate the match, you have to play him in the right position, he needs a certain kind of support, etc. etc. Then what the hell was that?

Second: after the first goal, he immediately pointed to the assister, Marcus Rashford. In the ensuing mass embrace, he pointed to Rashford several times more. Only afterwards did he do a look-at-me dance. But after the second goal, he didn’t point to the assister, Ander Herrera. He just started a solo celebration. When Herrera showed up shortly afterwards, again Pogba didn’t point, and embraced the assister almost as an afterthought. Pogbologists, your conclusions, please.

Central Midfielder: Ashley Westwood (Burnley)
Three weeks ago, Westwood was pipped at the finish line by a guy whose name ends in –inho, which seems unfair. So now here he is, in all his Claret glory. Played tidy defence, passed the ball well, and when he decided to get forward, blew the doors off West Ham United. His first cross, from the left, led directly to Burnley’s first goal. His second cross, from the right, assisted the second goal. A through ball on the right wing would have led to a third, except Chris Wood fluffed his lines. A through ball on the left wing would again have led to a third, except Lukasz Fabianski made a fabulous save. Then a through ball through the middle would have meant a second assist, except Wood missed again. It’s Ashlinho from now on, and all you Brazilians will just have to wait your turn.

Central Midfielder: N’Golo Kanté (Chelsea)
He was covered in the Early Winner column. But while he was there for his attacking work, he’s here because he’s also still a TOTALLY AMAZING defender and distributor. We hardly even notice anymore when he has SIX INTERCEPTIONS and NINETY-SEVEN POINT ONE pass completion percentage. So I just mention it for the record.

Elsewhere, Georginio Wijnaldum made some excellent plays, showing off his ability in tight spaces. Seemed to tire a bit before he was subbed.

Winger: Xherdan Shaqiri (Liverpool)
I couldn’t find a single match report that highlighted Shaqiri’s contribution. That’s because the journalists wrote their articles when the score became 4-1, to make their lives easy. But Team of the Week is relentless, and so was Shaqiri during the second 45. A stunning display of skill, intelligence and creativity. He might have had two or three assists, but it was the kind of performance where stats meant nothing. He looked every inch a table-topping playmaker, a poet free to use rhyme and meter any way he pleased, or not at all. Watch the video, and then try to imagine what he felt like playing for Mark Hughes and Paul Lambert.

Winger: Raheem Sterling (Manchester City)
Enjoyed his afternoon at St. Mary’s. His run led to the own goal, and he lost two assists and a goal on great saves by McCarthy. Kayne Ramsay had about as much chance as Ramsay MacDonald. The bar’s pretty high for Raheem, but I’d say he cleared it. And now to Thursday, on which any self-respecting journalist (actually, are there any?) should be able to deliver 1,500 words on Raheem Sterling At Anfield.

It was an excellent weekend for wingers. Ainsley Maitland-Niles made his case for a regular starting role with a fine showing against Liverpool. Matched against Andrew Robertson, he won the majority of confrontations. You couldn’t ask for a better run and finish, and he had no hesitation driving forward. Some very good passing on the wing, too. If he can defend a bit, there’s no reason he can’t take Hector Bellerin’s job.

Equally impressive was teammate Alex Iwobi. Very aggressive bringing the ball forward, with an eye for a pass in all directions, and a classic assist for Maitland-Niles. Has developed more in a few months under Unai Emery than in a few years under Arsene Wenger.

Sadio Mané did his thing as well. As always he pressed and dribbled effectively, and the goal was one heck of a finish. If he’d stayed on the pitch another 30 minutes, he might have done enough to get the boldface letters. But there’s Thursday to think about.

Attacking Midfielder: Roberto Firmino (Liverpool)
What’s odd is that except for the rather splendid move for the second goal, he didn’t really look at his best until the hat-trick was sealed. In the latter part of the match he was passing to all points of the compass, directing whatever traffic he spotted. Earlier, not so much. No complaints here, though – sometimes sheer effort gets you over the line. And as long as you have Roberto Firmino, effort is something you’ll never be without.

Striker: Ashley Barnes (Burnley)
Let’s call him Ashlinho too. He did all the typical Ashley Barnes things (committed a bunch of fouls, was fouled a bunch of times), and quite a few things you wouldn’t expect. He continually found space behind the defence, or against slack marking through the middle. He nabbed an assist on a simply super headed ball to Chris Wood. Otherwise, he suffered the same fate as the other Ashlinho, missing two other assists when the finishers didn’t come through. He was also robbed by Lukasz Fabianski of a goal of his own. Probably his best game in a Burnley shirt, and one that strikers in plenty other shirts would be proud of.

There were several other good striker performances. Neither Mo Salah nor Marcus Rashford were at their absolute best, but both made a considerable mark. Salah’s penalty was pretty soft, I have to say, and he was less than clinical when going for goal. But his passing was unreal at times, and as always his movement was a big plus. Rashford notched a very fine goal and assist, and raced behind the Bournemouth defence on a regular basis.

The fluidity between Martial, Rashford and Lingard is spectacular. So flexible and constantly interchanging. That's how Manchester United should attack.

Elsewhere, Salomón Rondón had a strong match for Newcastle, with hard physical work, holdup play, and an excellent headed finish. Florin Andone is starting to show why Brighton spent so much time pursuing him: he’s a hard runner, and has that little burst of pace. He lost a set-piece goal on a fine save by Jordan Pickford.