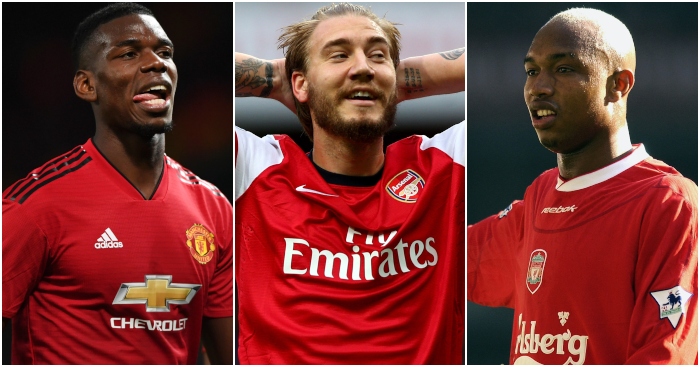 Paul Pogba
The France midfielder wants to go to Real Madrid this summer, just like he wanted to go to Barcelona last summer. Fair enough. Who wouldn’t? But the theory that Pogba has achieved what he set out to back at Old Trafford and that United have wasted a player of the 26-year-old’s supreme talent is just boll*cks.

If Pogba leaves United for a second time in the coming months, the £89million record signing must be looked upon as a flop. We have seen fleeting glimpses of the form we know him to be capable of but Pogba is the archetypal one-in-10 player. So many top performances have been sandwiched by woeful mediocrity.

Pogba’s allies are quick to blame Jose Mourinho for the first two and a half years of unfulfilled potential, but the ex-United boss tried almost everything. Different positions, different combinations, different formations – Mourinho, begrudgingly, even offered Pogba the vice-captaincy in an attempt to tease some consistency from His Excellency.

Roy Keane on Sky Sports: "Paul Pogba's days are numbered, they won't sell him in January but he'll move on. It's no big deal, he's left United before.”

Ole Gunnar Solskjaer’s carrot initially proved more effective than Jose’s stick but the new manager’s willingness to indulge Pogba is proving unsuccessful in what appear to be last-ditch efforts to coax some sustained form. Pogba hasn’t scored or created a goal since February 27 and, in the biggest games against PSG and Barcelona, he has been painfully ineffective.

Pogba reckons he belongs on the biggest stage but when offered such a platform by United in their big games over the last three seasons, more often than not, the Frenchman has sh*t himself in the spotlight. Perhaps he might go on to be a success at Real if he really fancies it. But he won’t get the patience at the Bernabeu that he has enjoyed at Old Trafford.

Depay is in no doubt he deserves to be one of the headline acts in European football but his form doesn’t back up the bluster. And it’s not yet two years since the Holland winger was sent packing from Old Trafford after blowing his big chance with Manchester United.

The 25-year-old reckons he merits another crack at the big time after a couple of creditable seasons with Lyon, but Depay isn’t even the best player in his own team, let alone Ligue Un. And typically of the Holland winger, at a time he should be looking to prove himself, his form has plummeted.

Depay has one goal and one assist to his name over the last four months in Ligue Un and the Champions League. His early-season output was certainly better, but none of his six goals came against a league opponent placed higher than 10th while only three assists have been achieved against top-half opposition. Though he may have crept back towards the spotlight, the former PSV star has since reminded everyone why he can’t be trusted in it.

Similarly to Pogba, Barcelona offered Depay the chance to state his case. With Nabil Fekir suspended for the home leg of Lyon’s last 16 clash, Depay offered nothing in a 0-0 draw before providing even less at the Nou Camp as Barca ran the French side ragged.

Depay talks a good game and his YouTube compilation would make anyone sit up and take note. But, as he proved at United, when you scratch the surface, Depay’s talent and mentality appears too flaky for the highest level.

Wayne Rooney on Memphis Depay: "He came on at Stoke away, messed up for their goal & was made him play for the reserves. I said, 'Just don’t come in with your fancy stuff' & he turned up in his Rolls-Royce, wearing a leather jacket & a cowboy hat. I thought, ‘What’s the point?" pic.twitter.com/IH5MbYA0Y5

David Bentley
We can’t be too hard on Bentley for getting too big for his boots when even the England manager went along with the notion that the midfielder could be ‘the next David Beckham’. That was before the then-Blackburn star had even been named in a senior England squad. But Bentley was more than willing to believe his own hype, which presumably played a part in his decision to decline a call-up for the European Under-21 Championships in 2007, even if he cited concerns over potential fatigue the following season as the primary reason.

Though Bentley eventually went on to play for England, bridges were burned and his subsequent form was not strong enough to rebuild them. Stuart Pearce, who had no time for Bentley’s attitude, was only too happy to revisit the matter in 2013: “David Bentley pulled out because he didn’t want to burn out over the summer. Now I can’t remember the last time I saw the kid play a game. So you never know when your form’s coming and going.”

By that time, Bentley was 28 and less than a year from retirement. His ambitions aged 23 – “I want to play European football, I want to play at the top of my game. I want to go to the World Cup in two years and I want to be starting” – remained unfulfilled after a £15million move to Tottenham went horribly wrong. He struggled to get in the Spurs team, let alone England’s, despite doing this…

Much of his six-year, £50,000-a-week contract at Spurs was spent away from White Hart Lane on unsuccessful loan spells at Birmingham, West Ham, FC Rostov and Blackburn. He was released a year early and eventually quit the game in 2014 having been without a club for a year.

Nicklas Bendtner
Back in 2011, Arsenal sport psychologist Jacques Crevoisier discussed some of mental tests the Gunners had conducted on their players: “One of the categories is called ‘self perceived competence,’ i.e. how good the player himself thinks he is. On a scale up to nine, Bendtner got 10! We have never seen that before.”

We already knew, though, that Bendtner would ace the test, given the year before, he had offered this insight into his mindset: “If you ask me if I am one of the best strikers in the world, I say yes because I believe it.”

Strikers certainly need confidence but Bendtner’s subsequent career seems to suggest his lurched beyond delusion. He failed to make the breakthrough at Arsenal, while loan spells at Sunderland and Birmingham offered little evidence to suggest Arsene Wenger was wrong not to share the centre-forward’s belief in his own ability.

Somehow, Bendtner snared a loan to Juventus but even Juve struggled to hide their disappointment at stooping to such a level. “Clearly he isn’t the top player we wanted, but we needed reinforcements,” said director Giuseppe Marotta before the Denmark star failed to score a single goal on the way to stealing a Serie A winner’s medal.

Made a call & a report on Sporten.dk saying the two Juve Stores in Turin have yet to sell a Nicklas Bendtner replica shirt IS true #JuveNews

El Hadji Diouf
Steven Gerrard’s bezzie mate is not shy in discussing his resentment towards his former club. “I would say Liverpool,” he replied when asked which club he most regretted playing for. “Because if I had the chance again I would go to Manchester United or Barcelona. At the time they wanted me also.”

Six goals in 80 appearances for Liverpool following his £10million move in 2002 suggests United and Barca had lucky escapes, if indeed there ever was a genuine interest. Diouf caught the eye at the World Cup, just as he likes to wherever he goes, but he still left Japan and South Korea without a goal or assist during Senegal’s run to the quarter-finals.

His new Liverpool team-mates had him sussed from the start. “Do you remember being at school and picking sides for a game of football?” Jamie Carragher asked in his autobiography. “We do this at Liverpool for the five-a-sides. Diouf was ‘last pick’ within a few weeks.”

Diouf’s response? “The difference between Jamie and me is that I am a world-class player and he is a s**t.”

Being the only Liverpool No.9 not to net a single goal during any one season doesn’t scream ‘world class’, El Hadji. Nor does never hitting double figures for goals in any of his 12 seasons at any of his seven British clubs, which included Leeds and Doncaster in the Championship. An absolute weapon, he most certainly was. Just not on the pitch.

Such a nice fella, that El-Hadji Diouf pic.twitter.com/XwxQT64lQp