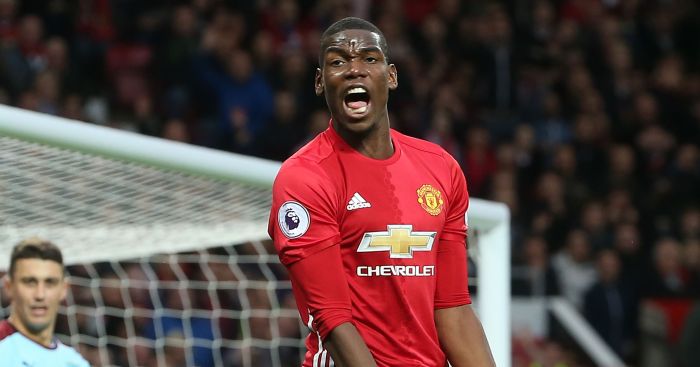 When you make a move for a world record fee, or even a club record fee, there’s always likely to be real pressure to not only make a real impact but do so instantly.

Eye-catching price tags are something that countless players have struggled to live up to in the past and certainly this season is no different. Andre Ayew set West Ham back over £20m in the summer, Jordon Ibe was a mere £15m for Bournemouth and Borja Baston, remember him, broke Swansea’s transfer record for a similar fee.

However, all of those figures pale in comparison to the £89m that Manchester United forked out to ensure the return of Paul Pogba. It’s a valuation that will likely continue to hang over the midfielder’s ever-changing head of hair for the rest of his career, and represents an opportunity to get on the Frenchman’s back should he dare to have an underwhelming game.

In fairness, there were a few of those from the 23-year old as he re-adjusted to the pace of English football, but while that would be wholly understandable for most, the money spent to secure his return to Old Trafford meant many were quick to question the fee. It is, of course, a ludicrous amount, but that’s football now and we have to accept it. With Pogba, after all, you’re not just signing a player, you’re signing a brand, which is something United were very aware of.

Just how marketable an individual is doesn’t win football matches, as was painstakingly apparent at the unfortunate timing of what was probably his worst performance in a United shirt against Liverpool, with the hashtag Pogba emoji haunting him from the billboards in a disappointing display. It’s crucial to the biggest deals in football nowadays though, and only serves as another instrument with which to beat ‘the brand’ over his head should he have a poor run.

In truth though, on the main Pogba has delivered exactly what was, or at least should have been, expected. Abject performances in both matches against United’s fiercest rivals in Liverpool have unsurprisingly but perhaps slightly unfairly skewed opinions of just how good the France international has been. 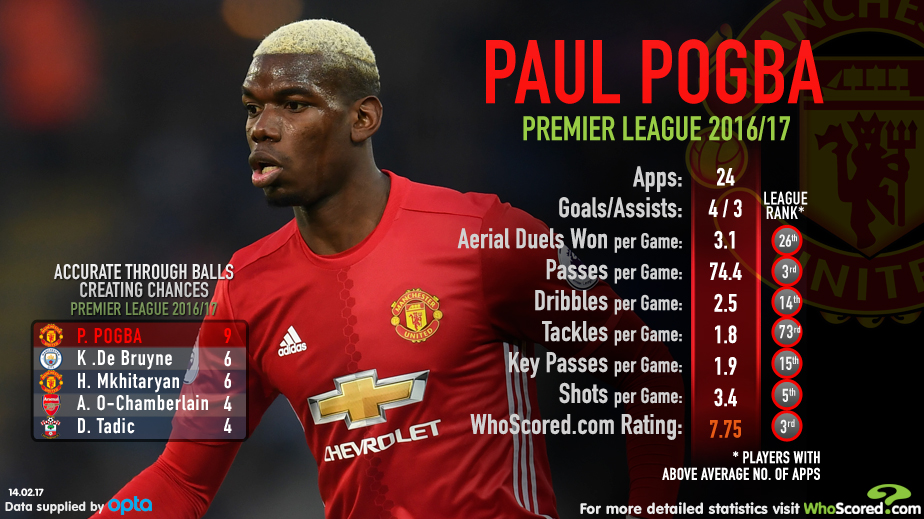 It’s undoubtedly true that Pogba should have improved on a modest four-goal haul given that he has mustered the fourth most shots in the league but his finishing, particularly from inside the box, has never been a strong suit by any means. Instead, with Pogba what you get is a presence in the middle of the park who has the ability to dictate the pace of matches and pull off genuinely outstanding passes into the final third.

Indeed, the former Juventus man’s technique and vision are that of a truly world-class talent. Ten players may have created more chances than the Frenchman in the Premier League this season but when you exclude set-pieces from those figures, Pogba’s tally of 46 ranks fifth, one behind Kevin De Bruyne, alongside Eden Hazard and one ahead of Christian Eriksen.

The rapport he has forged almost instantaneously with Zlatan Ibrahimovic has been the driving force behind Manchester United’s upturn in performances after a disappointing start. Bare in mind that he doesn’t have pace and mobility in front of him, but the intelligence of Ibrahimovic’s movement not only allows Pogba to spot passes that few others could but deliver them with pinpoint accuracy.

A total of nine accurate through balls that have led to shots this season is three more than any other Premier League player, making a return of just three assists – all of which have come from said pass types – somewhat misleadingly low. While Pogba has very much played his part in United having the fifth-lowest conversion rate in the Premier League, if their finishing were up to scratch compared to those around them, there’s little question that not only would Pogba would have more assists, but Mourinho’s men would be in the thick of a title race.

It’s not just his creativity that has inspired what is now the longest Premier League unbeaten run all season either (16 games). His ability to breeze past opponents in the middle of the park also puts the team on the front foot having completed the seventh most dribbles in England’s top flight and the most of any central midfielder (60).

Despite his well documented woes when marking from corners, he also leads the way for players in his position in terms of aerial duels won per game (3.1), further highlighting just how dominant he can be in the middle ground. His physique gives him the platform to become the archetypal super-footballer of the modern era, akin to previous transfer record breakers Bale and Ronaldo, and at 23 there’s very little to limit his potential. It’s also worth following the Premier League Scores with Sbat for United’s upcoming games.

He’s already undeniably pivotal to this Manchester United side, having averaged the third most passes per game in the Premier League (74.4), from a more advanced position than Henderson and Herrera ahead of him. With a further 1.8 tackles and 1.2 interceptions per game, were it not for a modest goal tally it would be very difficult to argue that Pogba hasn’t lived up to expectations, or realistic ones at least.

He’s earned the the third highest rating in the Premier League from WhoScored.com this season (7.75) as a result of his highly commendable all round contribution. He’s young and needs to improve areas of his game, but so did Ronaldo at his age. So did Bale. Pogba may not have been perfect but he’s been pretty bloody good.