Home All The News Paul Pogba is not on the transfer market, claims agent 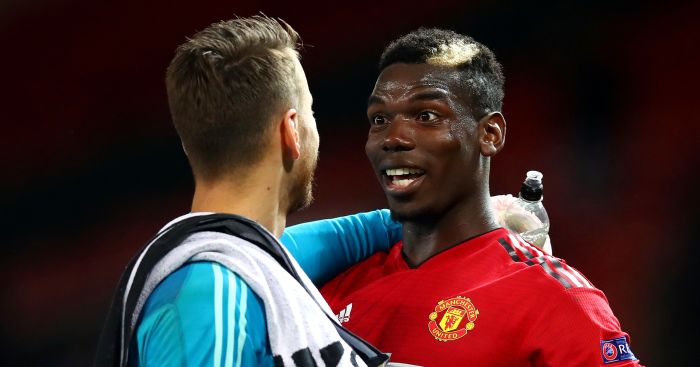 Paul Pogba is going through a “delicate moment” at Manchester United, according to his agent Mino Raiola.

The United midfielder has been stripped of the vice-captaincy at Old Trafford following his comments over Jose Mourinho’s style of play against Wolves a few weeks ago.

That was followed by pictures emerging of an apparent training-ground bust-up and his relationship with Mourinho now looks irreparable.

However, there are reports that the Portuguese manager could face the sack following their match against Newcastle on Saturday even if they win.

And there have been reports of a possible move to Paris Saint-Germain this morning but Raiola claims Pogba is “not on the market”.

“I prefer not to talk about him,” Raiola told Rai Sport.

“He’s going through a delicate moment, but he’s not on the market.”

And former United midfielder Darren Fletcher is amazed the situation has been allowed to play out in the public eye.

“It’s very difficult because everything is getting played out in the press,” Fletcher said on BBC 5Live.

“Every situation no matter how small it is, you know everything gets escalated but there’s just so many.

“It’s everyday, it’s every week there’s a new story about some spat or something.

“Nothing is getting dealt with behind closed doors like it used to.

“Things went wrong all the time at every football club but it got dealt with in the manager’s office or in the first team dressing room and that was it.

“Small bits got leaked out here and there but in the main, everything was kept in house.

“The problem now is everyone is playing their games and not even saying what they really mean, it’s all been in roundabout ways – ‘I can’t say this’ and little mixed messages and it’s becoming petty and played out in public.

“It’s not nice to see because Manchester United is bigger than this.”