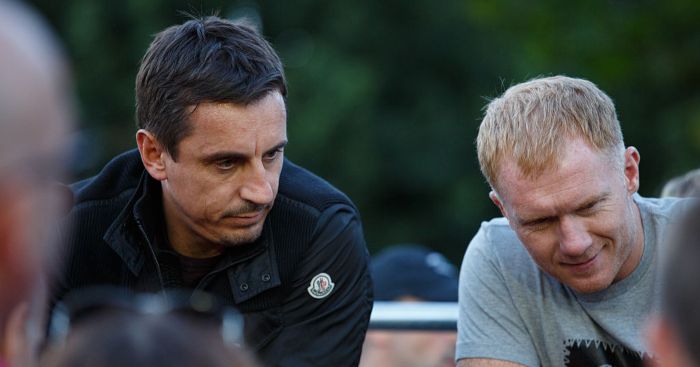 Paul Scholes says he “preferred” the four strikers from the 1999 treble winning season over the trio that helped Man Utd to Premier League and Champions League glory in 2008.

Sir Alex Ferguson guided his side to a famous treble in 1999 as a dramatic comeback victory over Bayern Munich secured their Champions League triumph and their third trophy of the season.

Speaking earlier this year, Neville – who was part of both teams –  reckoned the 2008 team had an edge because of the volume of world-class players.

“Without that great Barcelona team [2009-2011], I think that this would’ve been the greatest,” Neville said on Sky Sports.

“There were eight players, I would say at the time Edwin Van der Sar, Patrice Evra, Nemanja Vidic, Rio Ferdinand, Paul Scholes, Ryan Giggs, Wayne Rooney, Cristiano Ronaldo, Carlos Tevez, you could put them in any team in the world, they were world class.

“I don’t think Manchester United have ever had a team that had so many world class players, and I look back at all the teams in history. Of course there has been world-class players at Manchester United but to have eight almost nine best in position almost in the world at that time, it was an unbelievable team.”

However, Scholes has now said that he “preferred” the four strikers Man Utd had in 1999.

“There’s not a lot to choose between them. I probably enjoyed it more because I was getting involved with the forward players and not so much in 2008.”