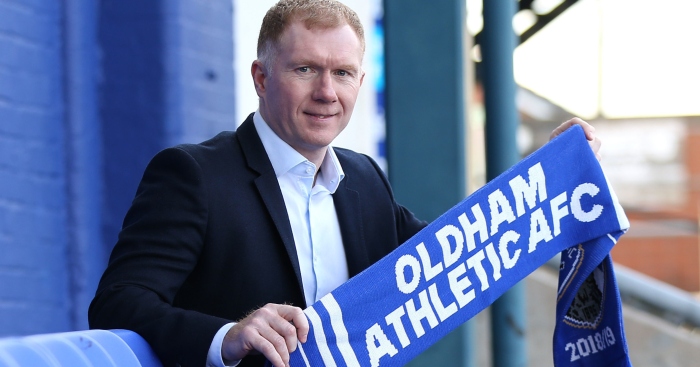 Paul Scholes has opened up on his disastrous first managerial experience at Oldham.

Scholes was appointed Oldham manager with the club 14th in League Two on February 11.

The former Manchester United midfielder won one, drew three and lost three of his seven games in charge before departing on March 14, with the club still 14th.

Scholes apparently resigned by text amid claims of chairman interference and the club having no running hot water, as well as being unable to provide a team coach to one fixture.

United manager Ole Gunnar Solskjaer has invited Scholes back for “a chat” at Old Trafford, with the 44-year-old shedding plenty of light on the situation on Saturday.

“I had heard loads of stories about interference and stuff,” he told BT Sport.

“There were subtle hints, yeah of course, but I’m not stupid enough to not realise what they are trying to do. In the last week there was a couple of issues with a couple of players. Experienced pros that I felt didn’t deserve to be treated the way the club wanted to treat them.

“I didn’t need the hassle of that. I really like the players, really respected them and would have done anything for them. But once I get told ‘don’t play him’, that’s when it is time for me to go…

"You always think you might be the one person to change it."

No hot water and a LOT of other frustrations…

But still no regrets.