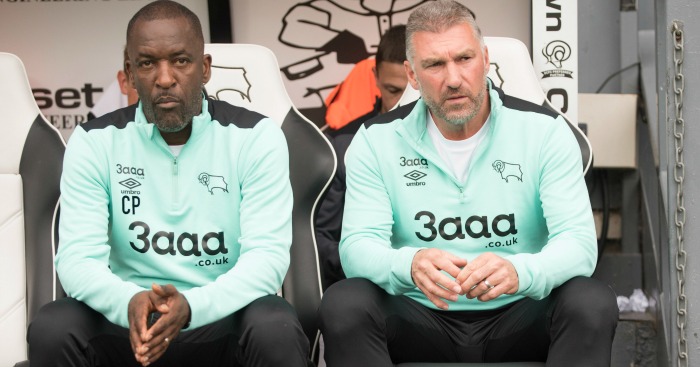 The 35-year-old had been suspended since September 27 following a meeting with owner Mel Morris at the club’s training ground.

The club said in a statement: “Derby County Football Club can today confirm that they have mutually agreed to part company with Nigel Pearson with immediate effect.

“As a result of the mutual termination of Nigel Pearson’s employment agreement with Derby County any disciplinary process has now ceased.

“The board of Derby County will now turn their attention to appointing a new manager as soon as possible and expect to announce a successor in a timely fashion.”

Former Leicester boss Pearson signed a three-year contract with the Rams in the summer and was charged with leading them back to the Premier League.

However the club made a disappointing start to the campaign and currently sit in 20th place in the table with just two wins from their 11 games to date.

In a statement released via the League Managers’ Association, Pearson said: “Although disappointed that my tenure at Derby County has come to an abrupt and premature end, I would like to take the opportunity to thank my colleagues who supported me during my short time at the club.

“I was suspended by the club last week. The speculation in some areas of the media has not made the separation a smooth one, and my suspension period has been difficult for both myself and family.

“I can confirm that I have not been made the subject of any disciplinary action.

“I leave in the knowledge that I have, together with my closest staff, strived to achieve progress.

“I would like to wish the club and its supporters success moving forward.”

Pearson’s former assistant Chris Powell is set to remain in temporary charge of the club while they search for a permanent successor.

Powell took charge of first team duties for the two games during the period of Pearson’s suspension, and could remain for next Saturday’s home game against Leeds.

The former Charlton man is one of the favourites to replace Pearson on a permanent basis, while Steve Bruce and former Rams boss Steve McClaren have also been linked.