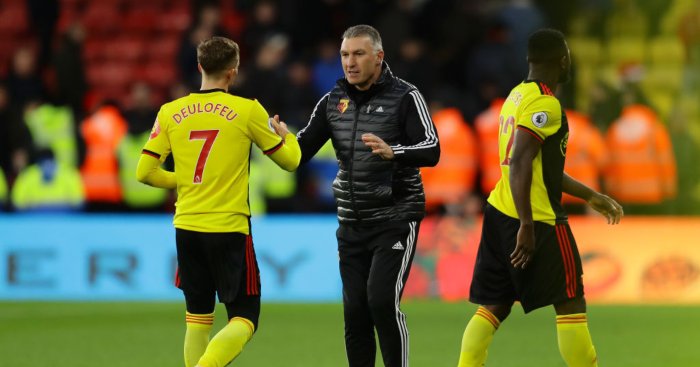 Nigel Pearson was “delighted” with Watford as they beat Manchester United 2-0 in the Premier League on Sunday.

Pearson‘s first home match was a free hit heading into Christmas, with the Hornets nine points off safety before kick-off and already staring down the barrel of relegation.

Yet Watford’s survival hopes received an unlikely shot in the arm on Sunday as United goalkeeper De Gea somehow let in Ismaila Sarr’s shot before Troy Deeney quickly scored a penalty foolishly given away by Aaron Wan-Bissaka in a vital 2-0 win.

Ole Gunnar Solskjaer’s side were out-fought and out-thought in Hertfordshire, where a forgettable first half was followed by a second period to remember for the Hornets.

“I am very pleased with the result,” Pearson told BBC Sport. “We needed that very badly because it would have been difficult to go beyond Christmas without a win.

“Performance wise we were probably played better last week, but I’m delighted how we approached the game. We have given the fans something to cheer.”

On a change of luck, Pearson added: “Errors always happen in games and I said to the players I would take a scruffy 1-0 win. I thought we did some good things, deserved to win the game and there is more to come.

“We’ve been unfortunate at times this season. We have to concentrate on ourselves and not worry what other people are doing. We have to set standards we are aiming for.”

On the possibility of a ‘Great Escape’, Pearson continued: “I’m not going to discuss that. We are in a difficult situation but I believe we can get out of it.

“The situation we are in we have do anything we can to win a game. I thought the players committed to the game exceptionally well. I’ll be very confident we can get out of this situation.”