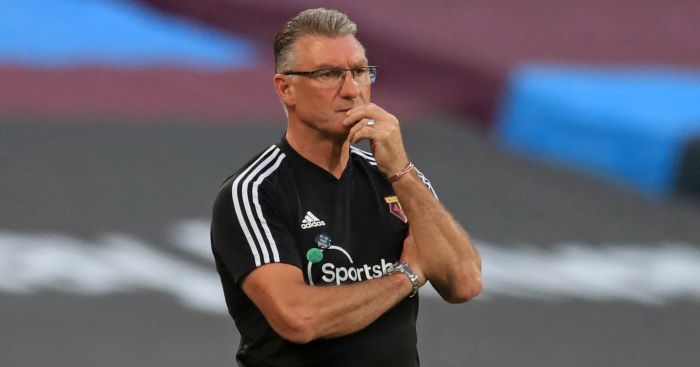 Nigel Pearson gave an honest assessment of his Watford team’s performances as they lost 2-1 to West Ham in a huge clash at the bottom of the Premier League.

The Hornets were level on points with West Ham going into the game, with both on 34 points.

The winner knew that they were likely to be safe from relegation, and it was West Ham who took the spoils. First half goals from Michail Antonio, Tomáš Souček and Declan Rice proved to be enough.

Troy Deeney pulled one back for Watford early in the second half, turning home after Abdoulaye Doucoure had hit the post. But it didn’t inspire a comeback, with West Ham seeing the game out comfortably.

And a visibly frustrated Pearson didn’t hold back when speaking to Sky Sports post-match, admitting his team didn’t turn up.

“It’s a poor result for us. It is a game which has passed us by somewhat in the first-half performance wise,” Pearson said.

“It’s not what I would expect from us and it’s very disappointing. We’ve got to find a win now in the last two games.

“[Conceding twice early on] is not easy to deal with. I didn’t think we were resilient enough collectively.

“I’m not saying everybody was, we had some spirited performances out there, but we were not what I would expect from us.

“Whether that’s the pressure of the situation, who knows? But now we have to find good performances in the last two games to give us chances of winning those games, it’s as simple as that.”