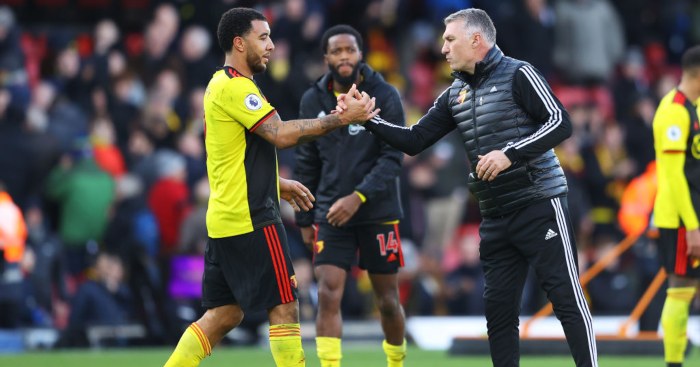 Nigel Pearson thought his Watford side created enough chances to win the game in a 0-0 draw against Tottenham.

The Hornets skipper saw his second-half spot-kick saved by Paulo Gazzaniga, but it was another point claimed during the current resurgence under Nigel Pearson.

Watford have now taken 14 points from their last six games and are looking upwards in the final third of the campaign.

“It was a game we felt we created enough to win,” Pearson told BBC Sport.

“They have had their situations and chances as well. In the first half we did not quite get our pressing as well as we have at late. We grew into the game and started to take more control. We had a good chance to win.”

On the penalty miss, Pearson added: “It’s football. I said to the players I am looking for a performance and we had a good performance today. If we go out with every intention to win the game then we will play well. I am pleased with how we played football today.”

On a busy week ahead, Pearson continued: “It’s going to be very busy. The important point is to get the players fit after today. We have to look ahead to the game against Aston Vila. It’s important to get our recovery right.”

On the goal-line technology, Pearson said: “It was millimetres? Lovely! Good.”