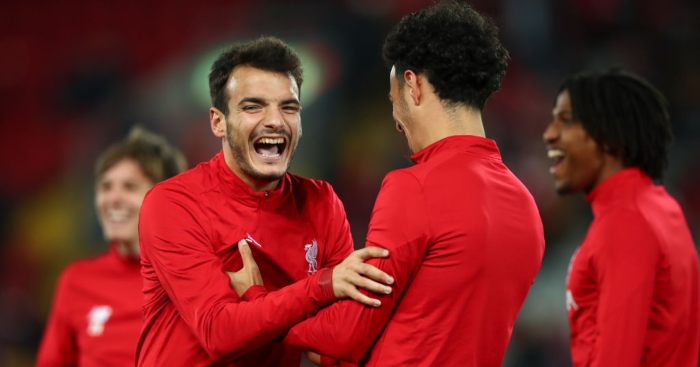 Pedro Chirivella will join Ligue Un side Nantes upon the expiration of his Liverpool contract this summer, according to reports.

Having joined the club’s youth system in 2013, making his first-team debut two years later, Chirivella is one of Liverpool’s longest-serving players.

But his opportunities have been limited under both Brendan Rodgers and Jurgen Klopp, with three separate loan spells at Go Ahead Eagles, Willem II and Extremadura heralding mixed results.

The 22-year-old has enjoyed something of a resurgence at Anfield this season, being hailed as “incredible” and “unbelievable” by former U23 coach Neil Critchley after starring in their domestic cup runs.

Chirivella impressed in the FA Cup third-round win over Everton and started both the fourth-round game and replay against Shrewsbury, before watching the quarter-final defeat to Chelsea from the bench.

Liverpool reached the same stage of the League Cup, when Chirivella captained an inexperienced side to defeat at Aston Villa in December.

Jurgen Klopp called him “probably the best player on the pitch” in that game and said “we were completely over the moon about what we saw there” from the Spaniard.

But he is likely to leave this summer in search of regular playing time, with French outlet 20 Minutes claiming Nantes have won that particular race.

GetFootballNewsFrance add that the deal will be ‘formally concluded’ by the start of next week, with a three-year contract on the table.

Chirivella himself said he was taking things “day by day” earlier this week amid the current global situation, adding: “I don’t like to think much about the future and what comes will come.

“I am in the best team in Europe and with the best coach in the world,” he said. “Every minute you play and, above all, each day of training that you share with all of them allows you to improve, so this season has been very important.

“Obviously I would like to have a few minutes in the Premier League, but I’m happy to see how we can finish.”