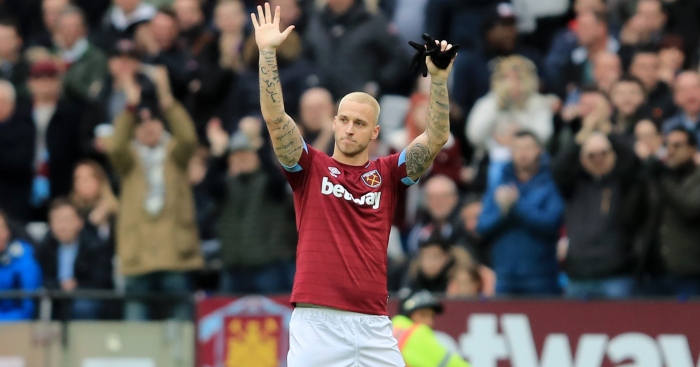 Manuel Pellegrini is hopeful that Marko Arnautovic will remain at West Ham this month.

The Hammers boss opted to select Arnautovic for the 1-0 win over Arsenal, despite the forward appearing to be keen on a January move to China.

The 29-year-old’s brother and agent claimed earlier in the week that Arnautovic wants to leave for the Chinese Super League and implored the club not to stand in his way.

Arnautovic was included in West Ham’s side and was given a positive response by the home fans, although he waved to all corners of the stadium as he was substituted for Andy Carroll in the second half.

“We will see what happens in the next few days and I hope he will take the best decision,” Pellegrini said when asked if the former Stoke man had been waving goodbye.

“I have been in this position a lot of time in my 30 years, but I’m calm with nothing 100 per cent sure (regarding Arnautovic’s future).”

Although Arnautovic and Samir Nasri were talking points, match-winner Rice was singled out for praise by Pellegrini.

The 19-year-old celebrates his birthday on Monday and has recently signed a new contract with West Ham.

He is yet to decide whether to represent England or the Republic of Ireland at international level, but Pellegrini is sure that whichever nation he opts to play for will benefit.

“I am sure Declan will be a top player,” he added.

“He is improving in every game he plays, he is now more used to giving us a good build-up in front.

“I’m sure that we are seeing a top player soon and we will see not only for West Ham but also for the national squad that he decides to play for.”