Home All The News Pellegrini: Hammers hero Anderson will keep getting better 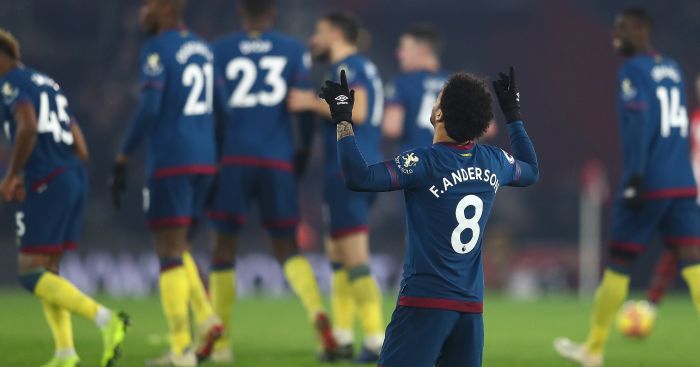 Manuel Pellegrini has warned West Ham’s rivals that he expects in-form midfielder Felipe Anderson to keep getting better and better.

The 25-year-old now boasts seven goals in his last nine West Ham games, but Pellegrini still expects him to improve upon that in the second half of the season.

“I said before this game that we had to gain all three points because we had lost at home to Watford. So I’m happy because we won and the team played well – that we got both together. This was a good win today, playing away against a team that had won its last two games.”

The Chilean wants to see the Hammers push further up the table, but is loath to set a definitive target for where his side should finish.

Asked how high the Hammers can push, Pellegrini replied: “Well it depends if we continue playing this way. That we could finish the first half of the season with 27 points after our start, that’s very good for us.

“But now we need to improve and to have that ambitious, winning mentality. Now we start the second half and we’ll see where we can go.”

Southampton took the lead through Nathan Redmond’s scrambled finish, only to leak two goals in six minutes and slip to a first defeat under new manager Ralph Hasenhuttl.

The Austrian boss felt his side could have had a penalty when Declan Rice held Jan Bednarek before West Ham broke for Anderson’s winner. But he also conceded Saints made too many errors to merit victory.

“In the Premier League if you make easy mistakes like we did in the second goal, then you don’t deserve to win,” said Hasenhuttl.

“The first goal, we can defend better. It was too easy how we gave our lead away, and that’s what we have to analyse and talk about in the next few days.”

Asked whether Saints deserved a penalty, Hasenhuttl added: “I’ve heard it, but I haven’t seen it. Maybe with a video assistant referee it can be a penalty for us and it can make a big difference for us, absolutely.

“But what we did in this moment was to shoot when there were 10 players standing in front.

“It’s better to chip in that moment, otherwise you’re at risk of counter-attack. We gave it away too easy, that’s what I said.”