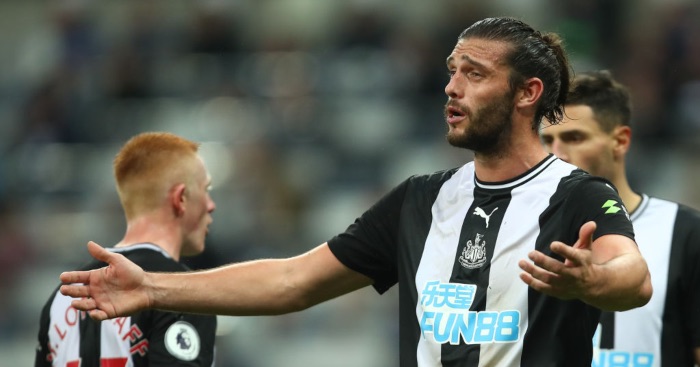 Manuel Pellegrini hopes Andy Carroll can put his injury problems behind him, even if the striker comes back to haunt West Ham.

Carroll rejoined hometown club Newcastle over the summer after seven injury-plagued seasons with the Hammers.

The former England international scored 34 goals in 142 appearances after joining for £15million from Liverpool in 2013 following a season on loan.

Carroll’s return to the London Stadium this weekend is in doubt due to a groin problem but Pellegrini, who allowed the 30-year-old to leave on a free transfer, wants his former player to get back to fitness.

“I hope he will be fit as he, like Winston Reid, is a player who has had many injuries, long injuries and they deserve to have a normal career,” said the Hammers boss.

“If he is on the bench, it will be one more difficult player that Newcastle will have. If not, they will have another one.

“I think the fans will give him a good welcome. For different reasons, Andy couldn’t stay here. When you defend the shirt the fans applaud you so often, he will deserve the same respect.”

Recurring injuries are still a theme at West Ham. Defender Reid has been out for 19 months after a serious knee injury, although he did manage just over an hour for the Hammers’ under-23s side in midweek.