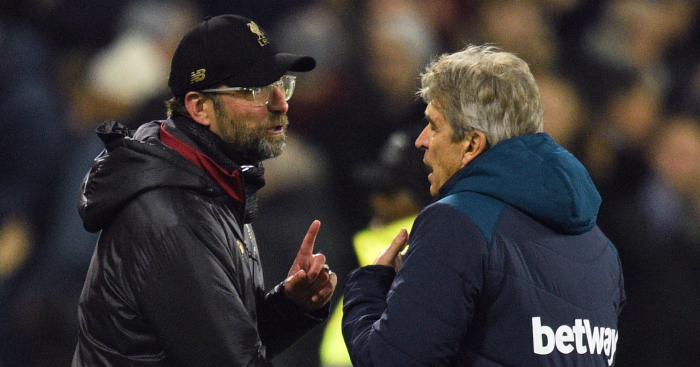 Jurgen Klopp “is used to winning with offside goals”, according to West Ham manager Manuel Pellegrini.

Klopp’s Liverpool were held by West Ham on Monday in a game that shortened their lead atop the Premier League to just three points.

The Reds took the lead through Sadio Mane’s controversial opener, with James Milner clearly offside in the build-up to the goal.

Michail Antonio equalised for the Hammers against an “anxious” Liverpool, with both managers clashing at the end of the game.

Pellegrini poked fun at his rival post-match, referencing the 2013 Champions League quarter-finals when his Malaga side were beaten by Klopp’s Borussia Dortmund.

“Klopp is used to winning with offside goals,” said Pellegrini.

“He beat me against Malaga with a goal seven metres offside – so he cannot complain about anything.

“I said in the week that we need to win this game for our fans and if we are going to give a hand to Manchester City, well, they are my club also.

“Maybe that was the reason the manager of Liverpool didn’t like it.”

What's being said in this exchange between Klopp and Pellegrini? 🗣 pic.twitter.com/POt5r4BYiN

Pellegrini added that he was “disappointed and worried” with the result – because he felt West Ham should have won.

“If you create four chances and didn’t score and they score a goal one metre and a half offside, you must be disappointed and worried.

“I think we played in the way I like this team to play against every team.

“Maybe in the moment that we were (on a losing run), nobody believed that we could do it but I was absolutely sure and I trusted the players that we can play in the way we did.

“I think we did a complete performance, because against the team that has the best defence we created so many chances.”