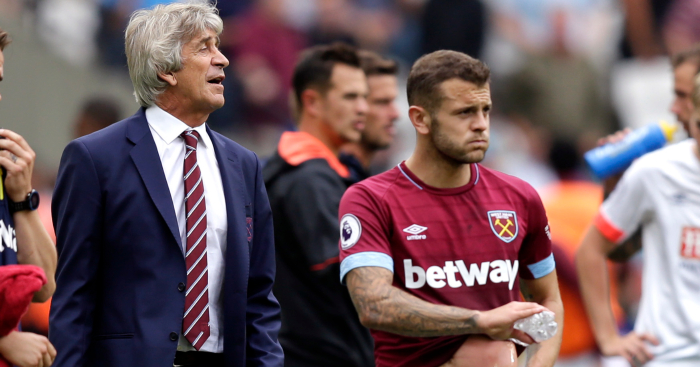 West Ham boss Manuel Pellegrini has hit back at suggestions that Jack Wilshere and Mark Noble cannot play together.

Former Hammers manager Sam Allardyce is among those to have claimed Wilshere and Noble are not mobile enough to form a midfield pairing.

Allardyce certainly seems to have a point if the first two games are anything to go by; the duo were overrun in the 4-0 defeat at Liverpool and then failed to impress as Bournemouth won 2-1 at the London Stadium last weekend. West Ham have certainly not solved their midfield problem.

However, Pellegrini insisted: “That is the opinion of Sam Allardyce. I know him and I respect him and everyone has his opinion.

“One opinion is that you can play one good player with the other one and the other is that they can play 4-4-2.

“If you need fast players they cannot do it. If you need good technical players that they don’t lose any balls, they can play together.

“In football there are a lot of things you can do. Remember Juventus around four or five years ago played with one holding midfielder. It was Andrea Pirlo.

“And Pirlo is the same as Jack. He has the same characteristics as Jack. I think that every good player can play with others.”