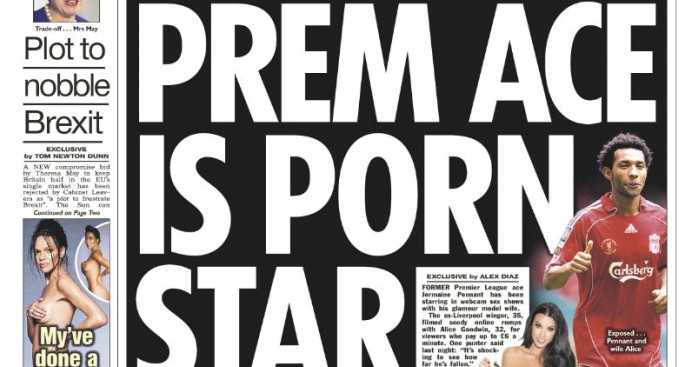 The Sun’s front page on Saturday claimed that Pennant ‘has been starring in webcam sex shows with his glamour model wife’.

Pennant’s face was not shown but it is thought that his tattoos do appear in the shows, for which viewers pay £6 a minute.

The Sun report: ‘Jermaine had been careful to keep his face out of shot during a seedy online romp but his hand — with a “Love” tattoo on his knuckles — could be seen as he joined in with Alice touching herself.

‘In another clip, the heavily-inked ex-Liverpool, Arsenal and Stoke City winger performed a sex act on her.’

“In fact the major concern for me and Alice is the influence all of this has on family and friends.

“Our lawyers are dealing with the situation now, this kind of thing needs to stop, just because I’m seen as an easy target doesn’t give anyone the right to write stories like that.